Passengers have been urged to check the status of their flights before departure.

Aer Lingus have advised that there will be a number of delays to their schedule on Tuesday (19 March) due to a general strike by air traffic controllers in France.

A significant percentage of air traffic controllers will be on strike in France on Tuesday, joining several workers’ unions in a day of strikes across the country, with flight delays emanating as a result.

Aer Lingus released a statement on the matter on Tuesday, which read: “Aer Lingus wishes to advise that due to a general strike by air traffic controllers in France, we are experiencing a number of delays to our schedule today, Tuesday 19 March.

Some European flights may be delayed or cancelled today due to a General Strike in France. Please check your flight status before leaving for the airport. If your flight does not operate, we can re-book you on the next available flight, or you can cancel and apply for a refund.

“We would advise guests to check the status of their flight before leaving for the airport on aerlingus.com. In the event your flight does not operate, guests will be re-booked on the next available flight or can cancel and apply for a refund. Aer Lingus would like to apologise for the disruption to guests travels which are due to circumstances beyond our control.”

Both Ireland West Airport and Cork Airport have confirmed to JOE that the strike had no impact on operations by 12.30 on Tuesday. JOE has reached out to Ryanair and airports in Shannon and Belfast for information on the impact the strike will have on operations.

At Dublin Airport, meanwhile, according to flight information on the Dublin Airport website, a number of flights have been delayed by an hour or more on Tuesday, including flights operated by British Airways, SAS and Ryanair, as well as Aer Lingus.

In a statement to JOE, a spokesperson for Dublin Airport Authority (DAA) said: "Normal fight operations at Dublin Airport today albeit with some minor delays to a small number of flights which may be related to airline’s own operational issues or the ATC strike in France." 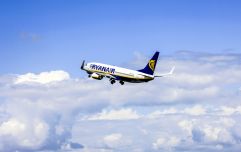 END_OF_DOCUMENT_TOKEN_TO_BE_REPLACED

On Tuesday morning, the Irish Aviation Authority issued a statement, which read: "General industrial action in France will take place from Monday 18 March at 1800 UTC until Wednesday 20 March at 0600 UTC (Coordinated Universal Time).

"This industrial action will significantly impact the Air Traffic Control capacity in France.

“Disruption to passengers is likely.

“Passengers are advised to check with their airline directly for further information.”

The Big Reviewski || JOE · The Big Reviewski with Andy Serkis, Squid Game follow-ups & the return of Succession
popular
Ryanair is seeking applicants for "the worst job in Ireland"
The JOE Friday Pub Quiz: Week 265
QUIZ: Can you master this General Knowledge Quiz?
Warning after person has bank account cleared out hours after scam text
National Lottery reveals 28 locations where tickets worth over €35,000 each were sold
PICS: The man with the biggest penis in the world has one unbelievable problem with it
People born in April are officially the sexiest, study finds
You may also like
3 weeks ago
Aer Lingus announces flight sale as US to lift travel ban for vaccinated EU passengers
3 weeks ago
The first ever foldable hotel room has been launched in Ireland
3 weeks ago
The US travel ban looks set to be lifted for vaccinated EU passengers
1 month ago
No you haven’t been imagining it, traffic is almost as bad as ever
1 month ago
EU removes Unites States and five other countries from safe travel list
1 month ago
Dublin Airport apologises for "lengthy queues" at security on Sunday morning
Next Page