Several websites, whose domain names have been mocked up to resemble the names of America's most respected news sites such as ABC News and NBC, today ran the story that Bill Murray had announced that he was running for President of the United States.

Here is an excerpt from the fake story: 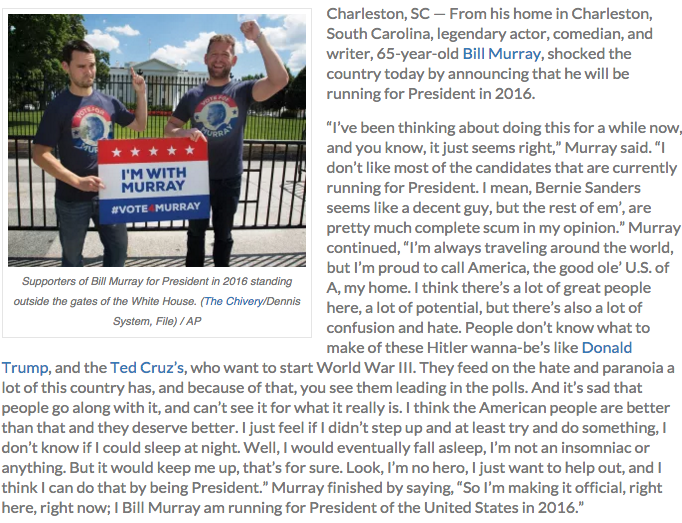 Outlandish as that seems, URL names like abcnews.com.co caused people to fall for the hoax, and the evidence is all over Twitter:

Apparently this isn't a joke! Murray for President! Would you vote for him? https://t.co/WpuAsyQ0x0

Bill Murray for president? Is this real life? https://t.co/H7skDqiI55

Highlight of today, hearing that BIll Murray announced his campaign for President

Whatever though, we'd still vote for the man ahead of Donald Trump or Ted Cruz.

popular
Amazon Prime Video has just added 21 big movies to its library
Here is a list of every Bank Holiday in Ireland in 2023
The 50 most iconic songs of all time* have been revealed
One of the best crime thrillers ever is among the movies on TV tonight
Netflix has just added one of the best sci-fi movies of recent years
Mark Hamill on the one piece of dialogue he got removed from the original Star Wars
Teenager killed in shark attack after swimming with dolphins in Australia
You may also like
1 year ago
Bill Murray is in Ireland this week to film new golfing series
3 years ago
Kevin Hart is remaking Bill Murray classic Scrooged
4 years ago
QUIZ: How well do you know Groundhog Day?
4 years ago
Dan Aykroyd on Ghostbusters 3: "It is being written right now"
4 years ago
This Bill Murray movie on Netflix is far better than critics would have you believe
5 years ago
Bill Murray disliked Groundhog Day so much he didn't speak to its director for over 20 years
Next Page