The latest security advice was updated on Monday.

The Australian Department of Foreign Affairs have warned tourists travelling to Ireland of increased tensions between dissident republicans and unionists in the lead up to the centenary of the 1916 Rising.

The Australian Department of Foreign Affairs website contains security advice for Australians travelling to individual countries around the world and in a recent update about Ireland, they warned about civil unrest and political tensions surrounding the 1916 centenary.

END_OF_DOCUMENT_TOKEN_TO_BE_REPLACED

“Tensions between dissident republicans and unionists have increased in the lead up to the centenary of the Easter Rising (24-29 April – Proclamation of Irish independence),” reads a section of travel advice on the Australian Department of Foreign Affairs website. 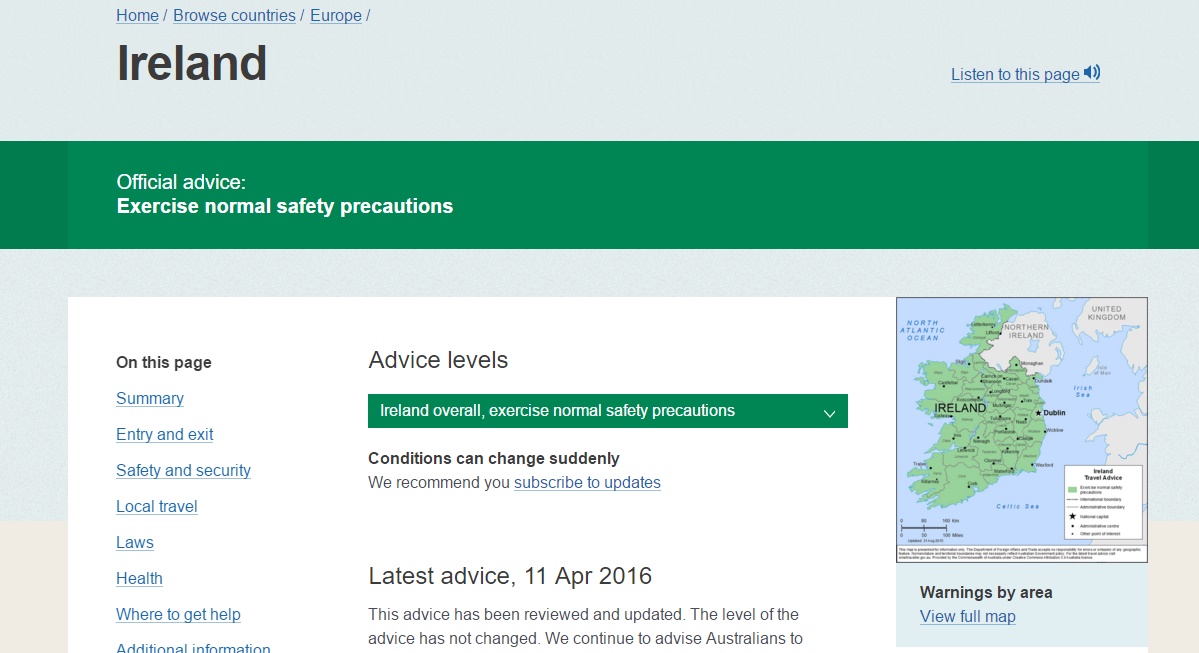 “You should avoid all protests and demonstrations, including those associated with Northern Ireland, as they may turn violent.

“Instances of civil disorder can rapidly escalate into violence and you should avoid them wherever possible, including through careful monitoring of the media and following the advice of local authorities.”

END_OF_DOCUMENT_TOKEN_TO_BE_REPLACED

Australian tourists to Ireland are advised to “exercise normal safety precautions,” when visiting the country.

Under the 'crime' heading, meanwhile, they are also warned that “petty crime, including bag snatching, smash and grab from cars and public transport, and pickpocketing is common, particularly in city centres and areas frequented by tourists”.

popular
Amazon Prime Video has just quietly added 15 big movies to its library
QUIZ: Can you guess the pixelated album cover?
An unforgettable sci-fi film is among the movies on TV tonight
Irish man dies following hit-and-run in London
Travis Barker rushed to hospital after tweeting "God save me"
Gardaí issue update on investigation into murder of Sophie Toscan du Plantier
Calls for €20 social welfare increase and minimum wage of €13 in new Budget
You may also like
18 hours ago
Some flavoured vaping products could soon be banned in EU
18 hours ago
Classic cars, a Tesla, designer watches and more seized in Criminal Assets Bureau raid
20 hours ago
Irish man dies following hit-and-run in London
22 hours ago
Youth stabbed during early morning assault in Waterford
23 hours ago
Romance fraud warning issued after over €100,000 credited to Irish bank account
1 day ago
New €360 million plan announced to tackle gender-based violence in Ireland
Next Page