"It's so rare to see what really happens behind closed doors and how rewarding that experience actually is."

"Autism is such a wide spectrum. Really, there aren't any two stories that are the same," blogger and activist Nicole Duggan tells JOE.

The writer behind My Boy Blue - a blog which has documented the life of her four-year-old son, Riley, who has autism - Nicole's latest project is an awareness campaign called Through Their Eyes that launched on Monday 26 March.

Choosing Snapchat to tell the stories of 35 different people who either have or work with people with autism, Through Their Eyes uses the platform as a new means of educating the public on the condition during Autism Awareness Week, which runs until World Autism Day.

"It kicked off this morning at 10am on Snapchat, and we're going to be putting out the stories of parents, siblings, therapists, special needs assistants, people with autism and advocates, each coming on to explain their own personal experience.

"The reaction has so far been amazing and it's only going to get better," she says, before expressing her excitement over a few of the special guests set to contribute to the campaign over the coming days.

First up on Monday evening is social media personality and Ireland's Got Mór Talent host James Kavanagh, while Adam Harris, who founded the charity AsIAm.ie, is due to tell his own story on Friday, 30 March.

"When I came up with the idea, James was immediately on board, because his nephew is on the spectrum. He and Adam said that the take-over was just an amazing way of telling these stories and getting across such emotions.

"Our first take-over was by a mother, Kim Walker, who was able to perfectly sum up what the campaign is about through her video. I've had people writing to me in tears since. 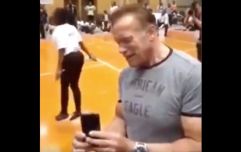 Arnold Schwarzenegger releases statement after getting dropkicked at event

END_OF_DOCUMENT_TOKEN_TO_BE_REPLACED

"With Snapchat, we have a wonderful opportunity to reach a greater audience and teach younger people that autism isn't the worst thing to come knocking on your door. It's good to see the reality, because it's so rare to see what really happens behind closed doors and how rewarding that experience actually is."

The campaign, she is keen to emphasise, is "not just sad and emotional stories."

"There are so many fun and interesting stories to come from each of the 35 personal stories. There is one in particular that I can't wait for people to see, which is coming out on Friday and involved a girl who is eight-years-old."

Through Their Eyes has officially Launched!!!! And we are kicking off with a massive giveaway!! Simply follow the snapchat and click this link to enter https://t.co/HfpwRuLr64 pic.twitter.com/IeAupAMN8M

"Like my son Riley, who's non-verbal, she was too until the age of 6. Now she was able to come on and give a very honest account, which is completely unbelievable. To hear about an experience from a child's perspective is amazing and empowering to parents who can see where she has come from and where she is now.

"We think it could break the internet, and that's important, because social media can be such a horrible place. If this takes off on Snapchat and spreads greater awareness, it can keep growing and we want it to, because while the campaign stops on 2 April, we want to keep telling these stories into the month of April."

"We want to keep this going for as long as we can," she finishes.

"This week, the take-overs are being done by a number of popular faces, but there are so many more stories and people interested in contributing afterwards. Awareness is the main aim here, teaching people that our kids are amazing.

"Even if they have extra needs, they are still children. This, we hope, will help people understand those differences better."


popular
Man being treated for suspected case of coronavirus in Belfast
The lineup for this week's Late Late Show has been revealed
QUIZ: Can you guess the pixellated movie posters?
QUIZ: Can you name all these European countries just from their vowels?
Met Éireann says there's a risk of snow for parts of Ireland this weekend
Here are the 5 best movies on TV this evening
Here are Ireland’s favourite takeaways, as per the National Takeaway Awards
You may also like
4 months ago
Instagram said to be working on a new app to rival Snapchat
11 months ago
New Irish Instagram-style app aims to replace your CV for good
1 year ago
Episode 2 of JOE's Snapchat show Argue Me is live: Tinder or the old-fashioned way?
1 year ago
JOE launches 'Argue Me' — a new show on Snapchat Discover
1 year ago
Snapchat announces five new unique Irish Shows for its Discover feature
1 year ago
Plastic surgeons report increase in procedures to make people look more like they do on Instagram
Next Page