Olympic boxing silver medallist, Kenny Egan has put all the speculation to bed and nailed his colours to the mast of Fine Gael.

Egan announced today that he is to run as a Fine Gael candidate in the upcoming local elections. It had been widely reported that Fianna Fáil had also approached the popular boxer, but he has opted for Enda’s party. So, instead of being on the canvas, he'll be...eh...on the canvas trail...or something.

He delivered the news today at a press conference and had this to say, “My motto is and always has been to ‘Keep it Real’ and I intend to follow this on my political journey." We reckon he's got a head start on most of the political fraternity with their inability to keep anything remotely real. 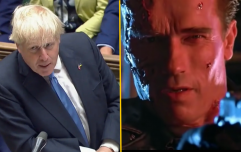 END_OF_DOCUMENT_TOKEN_TO_BE_REPLACED

He has also asked for people to refer to him as Kenneth and not Kenny. We presume he is talking about himself and not the Taoiseach. Enda Kenneth anyone?

Fine Gael also recently recruited former Irish running sensation, Eamonn Coghlan. Who is next in the world of sport to be approached by Fine Gael?

popular
QUIZ: You'll need to be razor-sharp to get 100% in this General Knowledge Quiz
The JOE Friday Pub Quiz: Week 307
The JOE Music Quiz: Week 117
An exciting Irish crime thriller is among the movies on TV tonight
Shooting stars set to light up Ireland's skies this weekend
James May reportedly hospitalised after crashing into wall at 75mph filming new show
Record for hottest August day in Ireland ever has now been broken
You may also like
3 weeks ago
Varadkar says "the cake will get smaller for everyone" if Sinn Féin take over
3 weeks ago
Another Fianna Fáil TD has cast doubt on Micheál Martin leading party into next general election
4 weeks ago
Fine Gael support hits lowest level in 28 years
1 month ago
No general election in the near future as Government survives vote of no confidence
1 month ago
EXPLAINER: What the hell is going on with the no confidence vote?
1 month ago
Boris Johnson says he is "so sad to give up the best job in the world"
Next Page