Supermac's have announced today that they will be creating 100 jobs at their new motorway service station in Kiltullagh, Co Galway.

Following on from the success of the Barack Obama plaza in Offaly, the new station in Galway will provide essential services to motorists travelling on the M6 motorway from Galway to Dublin. 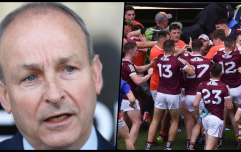 END_OF_DOCUMENT_TOKEN_TO_BE_REPLACED

The plaza, which is being funded by Supermac's owner Pat McDonagh, will be accessible to both directions on the motorway and will also link to local towns in the area.

Construction work on the site is under way near junction 16 on the M6, and the service station and food court will open early next year.

Speaking to the Galway Advertiser, Pat McDonagh said, "The volume of traffic on our motorways is continuously increasing. There are currently 15,000 vehicles passing the site at Kiltullagh daily.

"As well as providing key services, spacious parking means that drivers can rest comfortably, and ensure they are alert enough to take to the road.''

Supermac's also revealed that they will be creating a further 220 jobs in the future through other plazas already in the planning stages.

Great news coming out of Galway this morning...

Hat-tip to the Galway Advertiser.