I'd wager that most sports fans have either a Paddy Power or Betfair account and it appears very likely that two of the biggest names in gambling look set to merge. 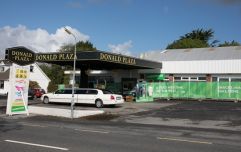 END_OF_DOCUMENT_TOKEN_TO_BE_REPLACED

Since their inception, Paddy Power have always been one of the leading bookies in the business but Betfair’s innovative online gambling exchange, which lets punters bet against each other in real time, has also ensured a large chunk of the market...as well as your money!

If the merger goes ahead then the combined companies would have revenues of more than £1.1bn, even more customers and massive potential to grow their market share in Europe, the US and Asia.

popular
Netflix has just added an incredibly tense 97-minute thriller
18 counties hit with weather warning as temperatures set to reach 29 degrees
GSOC investigating road crash in Monaghan that left multiple people injured
Nearly 100 flights delayed at Dublin Airport on Monday
Public urged to conserve water as around 60 areas at risk of supply shortages
Pogues bassist Darryl Hunt has died, aged 72
QUIZ: Can you get top marks in this short but tricky Irish geography quiz?
You may also like
2 years ago
WATCH: "Some of the biggest names in GAA" give their thoughts on the All-Ireland final
3 years ago
WATCH: These incredible Cheltenham impressions will get you buzzing for next week
3 years ago
WATCH: Paddy Power reveal Rhodri Giggs as new ambassador with ‘loyalty is dead’ promo video
3 years ago
PICS: Paddy Power double down on their England slagging with huge billboards all across Dublin
3 years ago
Paddy Power unveil savage full-page Brexit ads in two British newspapers
3 years ago
Paddy Power and Boyle Sports suspend betting on Airtricity League clash due to unusual betting activity
Next Page