A survey conducted by the Central Statistics Union (CSO) regarding binge drinking in the European Union has found that Irish people aged between 18-24 had the highest rate in 2014.

The data for that year was released on Wednesday and shows that more than a quarter of men and more than 15% of women in that age bracket engaged in binge drinking in Ireland at least once a week.

Binge drinking is defined as having six or more standard drinks in one session, which is the equivalent of three pints of beer or six pub measures of spirits.

Women and Men in Ireland is published today https://t.co/7lVr1P1mzn pic.twitter.com/s2uO11Sp9Q

The average EU standard for the male gender of that age bracket is 11.7% but Irish men come in at over double that on 26.8%, nearly a full percent more than second-placed Belgium.

Furthermore, the average for women is 4.3% but Irish women aged between 18-24 binge drink almost four times the amount with 15.5% saying they had a heavy episode of drinking at least once a week.

However, Irish women top that age group with 6.5% of drinkers admitting to having six or more standard drinks at least once a week. 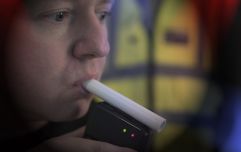 END_OF_DOCUMENT_TOKEN_TO_BE_REPLACED

When the two genders were combined, 21.4% of the youngest bracket admitted to binge-drinking, 13.8% of drinkers in the 24-64 age bracket have six or more standard drinks at least once a week and 13.7% from 18+ admitted to heavy episodes of drinking.

Cyprus, Latvia and Italy were among the countries with the lowest number of binge-drinkers.

popular
Amazon Prime Video has quietly added 10 big new movies to its library
One of the best Irish movies ever made has just been added to Netflix
The 50 most iconic songs of all time* have been revealed
House of Gucci has the best sex scene from a big Hollywood movie in years
8 great new additions to Amazon Prime Video in December
Clint Eastwood's final western is among the movies on TV tonight
Netflix has quietly added 10 big new movies to its library
You may also like
4 months ago
Significant increase in weekly alcohol consumption for Irish 18-24 year-olds during pandemic
4 months ago
Love Islanders are only allowed 2 drinks per night
1 year ago
Life after lockdown: Will Covid19 change our drinking habits in the long term?
1 year ago
Large proportion of Irish people may be “in denial” about how much alcohol they drink
1 year ago
We asked every TD whether or not they'd ever driven after drinking
1 year ago
105 minute slots and toilet queues - Fáilte Ireland publish guidelines for reopening pubs
Next Page