Boris Johnson has refused to show up to the Channel 4-hosted Conservative leadership contest debate leaving an empty lectern left on stage by the broadcaster.

The 90-minute debate, presented by Kristian Guru-Murthy, is the first of a number of planned hustings of the six Tory leadership candidates, seeing a number of swing-voters asking questions of the candidates.

Jeremy Hunt, Michael Gove, Dominic Raab, Sajid Javid and Rory Stewart all appeared on Sunday night, however, Boris Johnson did not feature, having previously declined the invitation, though he will attend the BBC's planned showdown.

Speaking in a video link to Channel 4 News ahead of the debate beginning, host Krishnan Guru-Murphy said there was "still time" for Johnson to get a "taxi from North London".

"Boris Johnson has declined to take part in this debate," he added. 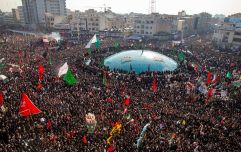 No, it's not World War III: An explainer on the current situation between the US and Iran

END_OF_DOCUMENT_TOKEN_TO_BE_REPLACED

Eleven Tory MPs were initially in the running to replace Theresa May as party leader and prime minister, with the numbers now cut down to an all-male slate of six.

The process of selection sees Conservative MPs whittle the number of participants down to two, with the two candidates then being put to a ballot of the party's grassroots membership.

The front-runner in the contest remains Boris Johnson, who is a favourite with the party's membership and was backed by the most MPs in the first round of voting.


popular
QUIZ: Can you name all the Irish counties just by their shape?
PERSONALITY TEST: What percent tosser are you?
Ted Bundy documentary featuring long-term girlfriend Elizabeth Kendall released this week
25 jokes which make Airplane! one of the funniest movies of all time
QUIZ: Can you match the Father Ted quote to the character that said it?
Ireland's longest bridge is set to open today
PERSONALITY TEST: Which Peaky Blinders character are you?
You may also like
6 days ago
Fine Gael and Fianna Fáil say Sinn Féin's rent-freeze proposal is unconstitutional. We asked a constitutional lawyer
1 week ago
Paddy Holohan has been suspended from Sinn Féin over his claims that "scum" underage girls were having sex with men and blackmailing them
2 weeks ago
All of Ireland's political parties are profoundly unpopular
2 weeks ago
Confusion reigns as people who "registered" in the past year may not be eligible to vote in general election
2 weeks ago
Verona Murphy to run as independent candidate in general election
2 weeks ago
Sinn Féin backs deal to restore power-sharing in Stormont
Next Page