Boris Johnson is facing calls for him to apologise after comments he made regarding the wearing of the burka.

Writing in his column for The Telegraph, the former foreign secretary said he found the covering worn by some Muslim women "oppressive" and questioned why they would "go around looking like letter boxes". 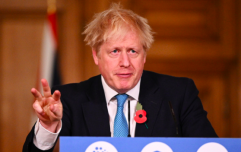 END_OF_DOCUMENT_TOKEN_TO_BE_REPLACED

"If you tell me that the burka is oppressive, then I am with you," he said.

"If you say that it is weird and bullying to expect women to cover their faces, then I totally agree - and I would add that I can find no scriptural authority for the practice in the Koran.

"I would go further and say that it is absolutely ridiculous that people should choose to go around looking like letter boxes."

He also revealed he would "feel entitled" to ask a woman wearing the burka to remove it if she came to his constituency office.

His comments sparked an angry response from other politicians, who claimed he was stoking Islamophobia, while Labour have urged Johnson to apologise.

Labour MPs have also accused of him of stoking Islamophobia in a bid to boost his chances of becoming the next Conservative leader.

Advertisement
House of Rugby Ireland · Quinn Roux on finding a home in Ireland and Mike McCarthy brings the absolute HEAT!
popular
Joe Biden begins presidency with 15 executive orders, some reversing Trump policies
Medical cannabis programme to begin in Ireland this year
Xbox reveals full list of exclusive games arriving in 2021
Snow and ice warning issued for seven counties
The 50 most iconic songs of all time* have been revealed
New year, new you, new career? This opportunity could be right up your street
Three men arrested following search of "chop shop" in Meath
You may also like
1 month ago
Amazon warns Irish customers about new post-Brexit charges
3 months ago
EU launches legal action against the United Kingdom over Brexit bill
4 months ago
Ed Miliband tears into Boris Johnson over Northern Ireland and Brexit
5 months ago
UK government revisiting the idea of a bridge between Scotland and Northern Ireland
8 months ago
Boris Johnson and Carrie Symonds announce birth of first child
9 months ago
Boris Johnson moved to intensive care unit as condition worsens
Next Page