Bread is being sold for ridiculous money on Done Deal

Supply and demand, my friend...

One of the most entertaining movies of recent years, The Wolf of Wall Street, has a very famous scene.

In order to show them how sales works, Leonardo DiCaprio's character Jordan Belfort pulls out a pen and going around the room one by one, with the instruction to "Sell me this pen."

Responses vary between: "This is the best pen ever made" to claims that "This may be the last pen you ever have to buy."

After each one, DiCaprio shakes his head and takes the pen back.  Finally one member of his team grabs the pen from him and hands DiCaprio a piece of paper.

"Write your name on this piece of paper," he tells DiCaprio.

When DiCaprio looks around for something to write with, the future salesman replies: "Oh, you don’t have a pen anymore. Supply and demand, bro."

It seems that a lot of jokers in Ireland took this advice on board last night as shoppers moved through stores across the country clearing them of all their bread like a plague of locusts.

It's now possible to buy bread on Done Deal, if you're willing to part with some of your hard earned cash, as the ad below reveals.

"Top of the range bread can't find anywhere in Ireland you won't get a better offer buy today and receive a free yes free 1 litre bottle of milk straight from the cows tit! Buy now or starve in this weather!"

They're some messers up in Cavan... 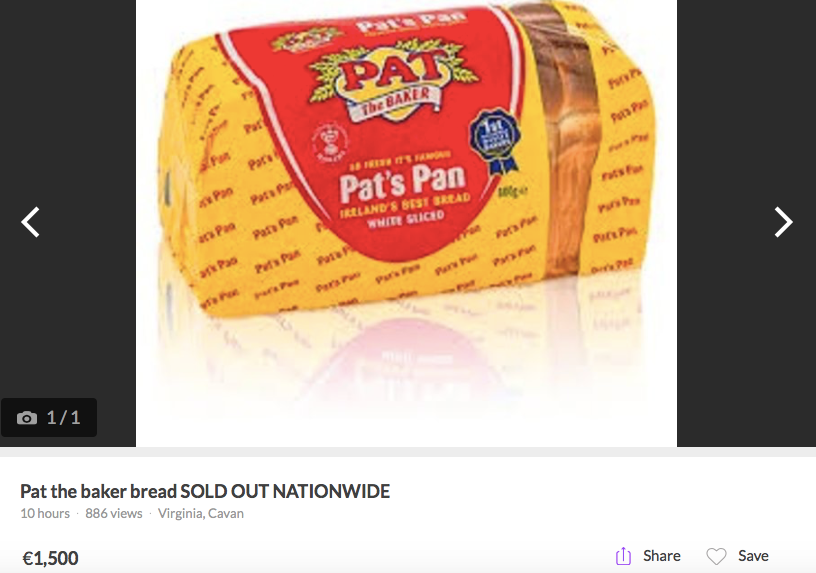 
popular
Met Éireann issues status yellow rainfall warning for nine counties
Motorist in Kildare caught driving with tax 13 years out of date
An Post announces increase in the price of stamps from next month
Social Democrats accuse Fine Gael of "shadow boxing" and "theatrics" after cancelling proposed meeting
QUIZ: How well do you know the Matrix series?
Met Éireann says to expect thunder, hail showers and potentially snow in parts today
QUIZ: How well do you know Will Smith's movie career?
You may also like
4 weeks ago
Ranking the 10 most passive-aggressive ways to end a text conversation
3 months ago
25 of the funniest tweets you might have missed in October
3 months ago
WATCH: RTÉ raised their game with their Halloween reporting on Thursday
3 months ago
PIC: Man discovers 1998 Spanish article naming part of Cork the most sexually repressed place in the world
5 months ago
Personality Test: What percent clown are you?
5 months ago
WATCH: The trailer for Season 14 of It's Always Sunny features melons, poison and laser tag
Next Page