A bus driver has been arrested after failing a roadside breath test in Cork, as passengers waited on board.

On Wednesday 1 January, Gardaí on patrol on the Western Road in Cork City stopped a bus and conducted a roadside breath test on the driver which returned with a fail.

A male in his early 50s was arrested at the scene on suspicion of drink-driving and brought to Bridewell Garda Station.

He was later released without charge.

The bus driver was driving the 11:48 220 Route from Carrigaline to Ballincollig at the time.

According to EchoLIVE, Bus Éireann released a statement in relation to the matter, apologising to customers involved: "Bus Éireann can confirm that the driver of the 11:48 Route 220 service from Carrigaline to Ballincollig was detained following a roadside check at Victoria Cross on January 1 2020. 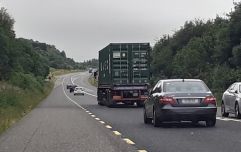 END_OF_DOCUMENT_TOKEN_TO_BE_REPLACED

"The vehicle was in service at the time, all passengers were transferred onto another vehicle with a minimal delay.

"We would like to apologise to any customers impacted, we have no further comment at this time."

Gardaí have said that a file will be prepared for the Director of Public Prosecutions.

JOE has reached out to Bus Éireann for comment.


popular
Two men arrested in Keane Mulready-Woods murder investigation
Tayto have launched two brand new crisp flavours for you to get stuck into
Here are all the best new titles coming to Netflix in March
It's Week 20 of JOE's 19 in 90 quickfire quiz
The story behind Netflix's latest true crime documentary is absolutely off-the-wall bonkers
Foo Fighters are touring this summer and an Irish gig is looking very likely
A preferred route has been chosen for the new Cork to Limerick motorway
You may also like
1 day ago
History to be required Junior Cycle subject from September
1 day ago
Two Irish citizens have tested positive for the coronavirus
1 day ago
Ryanair plane in Dublin disinfected after two people fall ill on flight
2 days ago
Irish passengers are on board two ships where the coronavirus has been detected
2 days ago
Met Éireann says to expect thunder, hail showers and potentially snow in parts today
2 days ago
An Post announces increase in the price of stamps from next month
Next Page