Best to plan ahead if travelling over the next few weeks.

Dublin Airport has advised passengers to expect lengthy queues for security screenings for weeks to come.

Over the weekend, there were a number of reports on social media of people missing their flights due to the delays.

Footage from inside Dublin Airport showing long queues at around 6pm to get through security, meandering the length of the departures area. The DAA has apologised and advised passengers to expect delays over the coming days and weeks, as new security staff are hired @RTENews pic.twitter.com/OOaSRqAsJJ

One woman wrote online that she was “prevented from flying” despite arriving three hours before her flight.

END_OF_DOCUMENT_TOKEN_TO_BE_REPLACED

"Absolutely chaotic scenes - it took us nearly three hours to get through security this morning. Felt so, so sorry for all of the parents with your children," another person wrote.

Another man said he had waited two and a half hours in queues to get through security only to miss his flight when he eventually got through.

Meanwhile, others are demanding refunds for missed flights.

The DAA, which operates Dublin Airport, has apologised to passengers, adding that it is working “extremely hard” to get things back to normal. 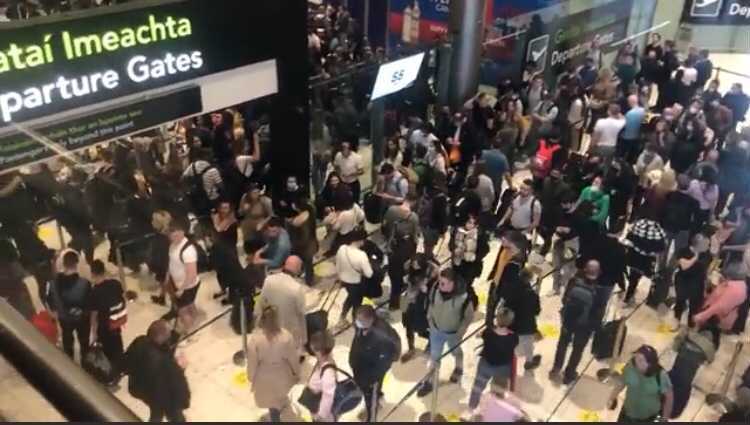 END_OF_DOCUMENT_TOKEN_TO_BE_REPLACED

“Like other airports all over Europe, we are currently working extremely hard to ramp-up our operation at Dublin Airport after the collapse of international travel over the past two years including the hiring and training of staff after 1,000 workers left the airport under a voluntary severance scheme during the Covid-19 pandemic," it said.

It added that anyone travelling through Dublin Airport in the coming days and weeks “should be prepared for things to take longer than they might expect”.

It also offered tips to passengers to help speed up the process.

“To minimise the impact, we encourage all passengers to check in bags where they can and to carry the minimum amount with them when presenting at security.

“We would also encourage all passengers to be at the airport a minimum of two hours before boarding a short-haul flight and three hours prior to boarding a long-haul flight.”