Two men have died as a result of a collision between a car and a bicycle in Limerick in the early hours of Friday morning.

The driver of the car and a male cyclist were both pronounced dead at the scene of the collision, which occurred on Hyde Road in Roxboro at approximately 12.15am on Friday. The ages of both men is unconfirmed at this time. 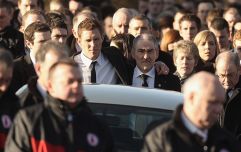 END_OF_DOCUMENT_TOKEN_TO_BE_REPLACED

A front seat passenger in the car, a male youth in his teens, was also injured and was taken by ambulance to University Hospital Limerick, with non-life threatening injuries.

No other injuries were reported.

Forensic Collision Investigators will be examining the scene on Friday morning and the road remains closed. Local diversions are in place.

Gardaí at Roxboro Road are appealing for any witnesses to the collision to come forward. Gardaí are also appealing for any road users who may have camera footage (including dash-cam) who were travelling in the area at the time to make this footage available to Gardaí.

popular
New powers to allow Gardaí request the passcode for smartphones
Matt LeBlanc has seen the memes of him as every Irish auld lad and very much enjoyed them
The JOE Movie Quiz: Week 106
It's official, these are the sunniest counties in Ireland
QUIZ: Can you name all of these counties from their nicknames?
QUIZ: Take on this tasty challenge of your General Knowledge skills
The 50 most iconic songs of all time* have been revealed
You may also like
4 hours ago
New powers to allow Gardaí request the passcode for smartphones
6 hours ago
Pharmacies to begin administering Covid-19 vaccines from today
6 hours ago
Cyclist in critical condition following hit and run collision in Dublin
21 hours ago
People all over Ireland enjoy the sunshine as temperatures soar on "hottest day of the year"
21 hours ago
James Geoghegan said planners of concrete social spaces "should be shot"
22 hours ago
315 new cases of Covid-19 reported across Ireland
Next Page