Enda Kenny has announced that he will step down as leader of the Fine Gael Party on Wednesday night.

Kenny will remain as Taoiseach in an acting capacity until his successor is elected though the Fine Gael leadership process.

END_OF_DOCUMENT_TOKEN_TO_BE_REPLACED

In a statement, Kenny said:

"Last year I indicated that I would not lead the Fine Gael Party into the next General Election. I have decided to implement that decision from today. Therefore I will retire as Leader of Fine Gael effective from midnight tonight 17th May 2017.

"I will continue to carry out my duties as Part Leader in an acting capacity, until my successor is elected through the Fine Gael Leadership Election process.

"I have asked that the Fine Gael Executive Council expedite this process and to have it concluded by close of business on Friday 2nd June."

You can read the statement in full below... 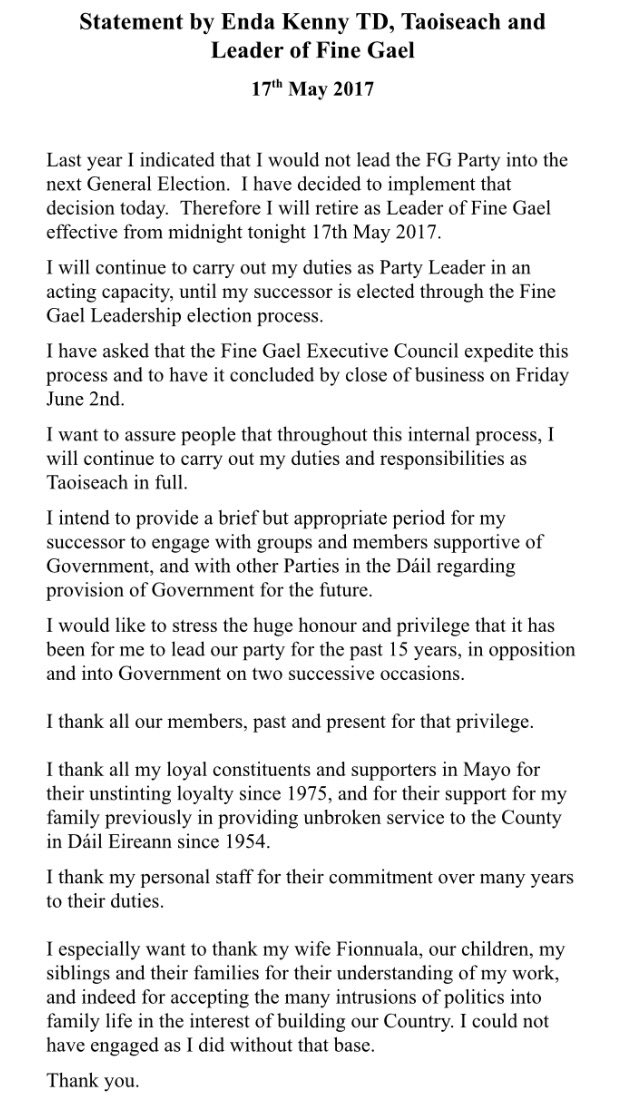 popular
Gardaí urge public not to share "upsetting" pictures of fatal assault of Paul 'Babs' Connolly in Westmeath
QUIZ: You'll do well to get 100% in this General Knowledge Quiz
Disney+ has just added 10 big movies to its library
25 years ago, Sylvester Stallone delivered his best performance in a hard-hitting crime drama
FBI release findings of Rust investigation after shooting of Halyna Hutchins
QUIZ: You'll need to be razor-sharp to get 100% in this General Knowledge Quiz
The JOE Friday Pub Quiz: Week 307
You may also like
11 hours ago
Nearly €400k worth of cannabis seized in Galway
1 day ago
Thunderstorm warning to kick in for Ireland this weekend
1 day ago
Man in his 40s dies following fatal assault in Westmeath
2 days ago
Danny Healy-Rae insists the Puck Fair goat is safe and well looked after
2 days ago
Shooting stars set to light up Ireland's skies this weekend
2 days ago
Woman in her 20s dies following fatal assault in Meath
Next Page