A cyclist who was struck in a hit-and-run collision on North Wall in Dublin on Monday night has died.

The man in his 20s, named by the English Language Students' Union of Ireland as Thiago Cortes, was taken to the Mater Hospital following the collision but has since died from his injuries. 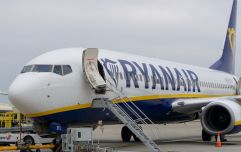 END_OF_DOCUMENT_TOKEN_TO_BE_REPLACED

The driver of the car failed to remain at the scene and the car involved was found at Castleforbes Square a short time later.

Gardaí are renewing their appeal for witnesses and in particular to anyone who was in the area of the North Wall Quay, North Wall Avenue, East Wall Road, Sheriff Street Upper, Castleforbes Road or Castleforbes Square between 10.15pm and 10.30pm to come forward.

They are also appealing to road users with camera footage (including dash-cam) from the area at the time to make it available to them.