"Dolores will live on eternally in her music."

The Cranberries have released an official band statement following the news that frontwoman Dolores O'Riordan died as a result of drowning due to alcohol intoxication.

END_OF_DOCUMENT_TOKEN_TO_BE_REPLACED

The information was revealed by an inquest at Westminster Coroner's Court on Thursday morning.

The Limerick star was found dead in a London hotel on 15 January, where she was staying before a planned series of recording sessions.

Various tests were carried out after a post-mortem examination, upon which Metropolitan Police ruled out any foul play.

Following the verdict, the remaining members of The Cranberries - Mike Hogan, Noel Hogan and Fergal Lawler - released an official statement via social media. 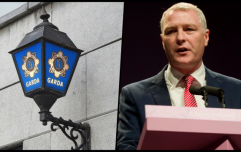 END_OF_DOCUMENT_TOKEN_TO_BE_REPLACED

"On January 15th 2018 we lost our dear friend and band mate Dolores O'Riordan," it began.

"Today we continue to struggle to come to terms with what happened.

"Our heartfelt condolences go out to Dolores' children and her family and our thoughts are with them today.

"Dolores will live on eternally in her music. To see how much of a positive impact she had on people's lives has been a source of great comfort to us.

"We'd like to say thank you to all of our fans for the outpouring of messages and their continued support during this very difficult time.

"We request, please, for our privacy to be respected at this time."