Sadiq Khan has granted permission for the balloon depicting Donald Trump as a baby to fly in Westminster during the US president's visit to the UK.

The 20-foot Donald Trump baby balloon that the president said last year made him feel "unwelcome" in London will once again fly when he makes a state visit to the UK next week.

The Sadiq Khan led Greater London Authority has granted permission for the balloon to be flown over Parliament Square on Tuesday, the second day of Trump's visit. The balloon depicts the Republican president as an angry baby, wearing a nappy and tweeting on a mobile phone.

The three-day visit will kick off on Monday, the day the balloon is flown will see Trump having breakfast at St James's Palace with Theresa May and British business leaders.

Anna Vickerstaff, a member of the team behind the balloon, said: "Now that the GLA has given us permission, we're almost ready to fly the baby.

"All we need now is for the public to help us to hit our fundraiser target in support of the groups who are fighting the impacts of Trump's disastrous policies. 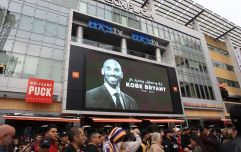 END_OF_DOCUMENT_TOKEN_TO_BE_REPLACED

"We've promised to get the baby in the air again - but only if and when we raise money for these groups.

"We're all for making a joke out of Trump, but we won't let the opportunity pass to support those fighting the very serious impacts of what he's doing."

A spokesperson for the Greater London Authority said its City Operations Unit grant permission for its flight after it was "carefully assessed" by officials.


popular
QUIZ: Can you name all the Irish counties just by their shape?
PERSONALITY TEST: What percent tosser are you?
25 jokes which make Airplane! one of the funniest movies of all time
QUIZ: Can you match the Father Ted quote to the character that said it?
Gardaí arrest woman (40s) in relation to the three children that were found dead in Dublin
Ted Bundy documentary featuring long-term girlfriend Elizabeth Kendall released this week
PERSONALITY TEST: Which Peaky Blinders character are you?
You may also like
1 day ago
Wuhan virus death toll rises above 100 as infection rates accelerate
2 days ago
Police confirm nine people dead following Kobe Bryant helicopter crash
2 days ago
Report: Kobe Bryant dies in helicopter crash
5 days ago
10 Chinese cities locked down and Beijing celebrations scrapped as Wuhan virus death toll rises
6 days ago
Wuhan shuts down public transport as death toll from virus rises
6 days ago
World Health Organisation says there's 'no doubt' e-cigarettes are harmful
Next Page