It has become a regular fixture of Trump's UK visits.

The notorious Donald Trump blimp has taken to the skies over London again on Tuesday morning.

It is, of course, to coincide with the US President's visit to the UK this week.

The balloon was inflated in Parliament Square, ready for a day of protesting. 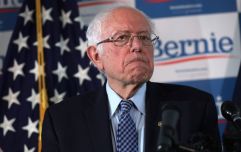 Bernie Sanders drops out of 2020 US presidential race

END_OF_DOCUMENT_TOKEN_TO_BE_REPLACED

The 20ft blimp was made possible by a crowdfunding campaign launched in response to Trump's visit to the UK in 2018.

"Donald Trump is a big, angry baby with a fragile ego and tiny hands," the group's crowdfunding page said.

"He's also a racist demagogue who is a danger to women, immigrants and minorities and a mortal threat to world peace and the very future of life on earth."

"Moral outrage is water off a duck's back to Trump," the group added.

"But he really seems to hate it when people make fun of him."

When asked about the stunt by The Sun in 2018, Trump said that the blimp made him feel "unwelcome" in the English capital and he saw "no reason" to visit the city.

“I guess when they put out blimps to make me feel unwelcome, no reason for me to go to London.

“I used to love London as a city. I haven’t been there in a long time.

"But when they make you feel unwelcome, why would I stay there?"


popular
“Chockablock” traffic on N11 prompts renewed appeals to public to avoid Easter weekend travel
Tesco make changes to their delivery system to favour elderly and in need customers
Here's Week 27 of JOE's 19 in 90 quickfire quiz
Someone in Ireland is €311,413 richer after Wednesday's Lotto draw
This Irish raffle is giving you the chance to win a €250,000 Ferrari
QUIZ: Can you name all of these characters from Love/Hate?
The 50 most iconic songs of all time* have been revealed
You may also like
17 hours ago
828 more people have died from Covid-19 in England
1 day ago
Body of Maeve Kennedy Townsend McKean recovered following canoe accident
2 days ago
WhatsApp is introducing stricter restrictions to curb spread of fake messages
2 days ago
China reports no new coronavirus deaths for first time since January
2 days ago
A tiger at Bronx Zoo in New York has tested positive for Covid-19
2 days ago
Boris Johnson continues to lead the UK government from hospital
Next Page