It is the latest in a series of tweets by the US President that have been flagged by Twitter in recent weeks.

A video shared on Twitter by US President Donald Trump has been flagged as ‘manipulated media’ by Twitter, after it was confirmed that the video had been edited and doctored to include a fake CNN logo and caption.

END_OF_DOCUMENT_TOKEN_TO_BE_REPLACED

The caption then changes to ‘Racist baby probably a Trump voter’ before ‘What Actually Happened’ appears on screen, with the video then showing the two toddlers running towards each other and embracing on the footpath. The white toddler then runs after the black toddler in the same footage shown at the beginning of the video shared by Trump, although the music strikes a markedly different tone this time around.

At the end of the video, a message appears on screen reading ‘America is not the problem, fake news is. If you see something, say something. Only you can prevent fake news dumpster fires’.

The video shared by Trump, which has garnered 11 million views at the time of writing, has been flagged as ‘manipulated media’ by Twitter. 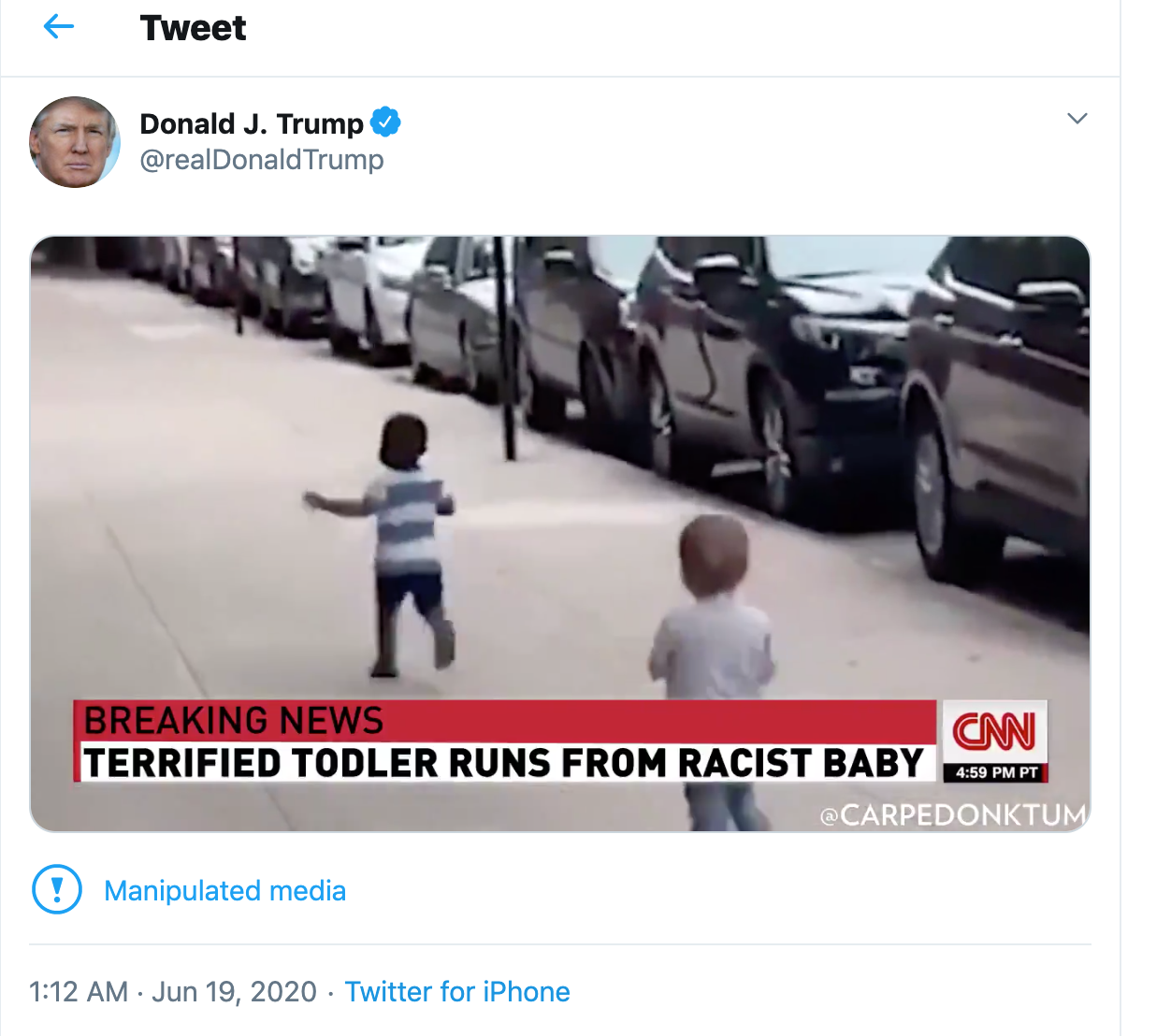 A link in the post redirects users to a picture of the two toddlers embracing and confirmation that it has been edited and features a fake CNN chyron (electronically generated caption).

The link also confirms that the original story about the friendship between the two toddlers was reported by CNN in September 2019.

As per Twitter rules, users may not deceptively promote synthetic or manipulated media that are likely to cause harm. In addition, Twitter may label tweets containing synthetic and manipulated media to help people understand their authenticity and to provide additional context. 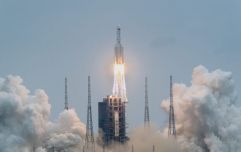 END_OF_DOCUMENT_TOKEN_TO_BE_REPLACED

In recent weeks, Twitter hid a post by Trump that violated Twitter rules about glorifying violence, while a number of his tweets were also accompanied with a fact-checking label.

The action taken by Twitter came after Facebook removed ads for the Donald Trump 2020 presidential campaign for the use of Nazi imagery.

The ads included an upside-down triangle, which, it was pointed out, was quite similar to notorious Nazi symbols associated with political prisoners in World War II concentration camps.

"We removed these posts and ads for violating our policy against organised hate,” a Facebook spokesperson told CNN.

“Our policy prohibits using a banned hate group's symbol to identify political prisoners without the context that condemns or discusses the symbol.”

popular
Penneys issue statement after shoppers try to sell appointments for €100
Man in his late 70s dies after fatal road collision in Westmeath
Man arrested after walking into Garda Station, spraying petrol on Gardaí and attempting to light it
Paul Murphy says there will be 2014-style mass protests if the Government re-introduce water charges
Met Éireann forecasts thunder, hail, and risk of spot flooding over next two days
This bird looks a little bit like Michael D Higgins, and he agrees
The 50 most iconic songs of all time* have been revealed
You may also like
6 days ago
Irish Government hits back after reports UK authorities will ban Troubles-era prosecutions of British soldiers
6 days ago
Canada becomes first country to approve use of Pfizer vaccine for kids over 12
6 days ago
Woman expecting to give birth to seven babies ends up having nine
1 week ago
Immunologist Luke O'Neill suggests delaying vaccines for under 30s in Ireland to donate jabs to developing countries
1 week ago
European Commission proposes easing restrictions on non-essential travel into the EU
1 week ago
Donald Trump "100%" thinking of running for US President again in 2024
Next Page