A major shift from the US President.

US President Donald Trump posted a photo of himself wearing a mask on Monday and said that wearing one is the patriotic thing to do.

"We are United in our effort to defeat the Invisible China Virus, and many people say that it is Patriotic to wear a face mask when you can't socially distance," Trump wrote. 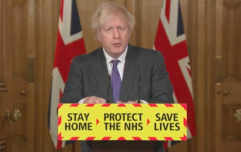 END_OF_DOCUMENT_TOKEN_TO_BE_REPLACED

"There is nobody more Patriotic than me, your favorite President!"

The image appears to show Trump wearing a mask with the presidential seal at his visit to Walter Reed National Military Medical Center earlier this month.

It was the only time that Trump has publicly been seen wearing a mask, although he was snapped wearing one at a behind the scenes tour of a Ford factory a few weeks ago.

The tweet is a clear move away from the US President's earlier reluctance to wear a facial covering in public.

CNN reported that at a meeting last week, senior aides showed Trump data which showed that the majority of US citizens did not support his stance on refusing to wear face coverings.

Earlier this year, Trump mocked Democratic presidential candidate Joe Biden for wearing a mask, and suggested it would not be presidential to wear one.

"Somehow sitting in the Oval Office behind that beautiful Resolute Desk ... I think wearing a face mask as I greet presidents, prime ministers, dictators, kings, queens. I don't know, somehow I don't see it for myself. Maybe I'll change my mind," Trump said at the time. 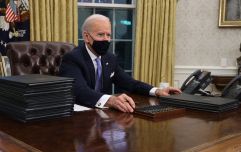 END_OF_DOCUMENT_TOKEN_TO_BE_REPLACED

In a surprise move, the US President also said he intended to restart the daily coronavirus briefings from Tuesday.

Trump was asked to clarify if the briefings were returning as polls showed sinking approval ratings for how he's handled the crisis.

"Well, we had very successful briefings," Trump said according to ABC News.

"I was doing them and we had a lot of people watching, record numbers watching in the history of cable television -- television, there's never been anything like it.

"And we were doing very well, and I thought it would be sort of, automatic and a lot of positive things were happening and frankly, a lot of the country is doing well," he said.

House of Rugby Ireland · Quinn Roux on finding a home in Ireland and Mike McCarthy brings the absolute HEAT!
popular
The JOE Movie Quiz: Week 86
Majority of English people 'pleased' or 'not bothered' by prospect of united Ireland
The 50 most iconic songs of all time* have been revealed
Ireland adores Leitrim hurler Zak Moradi on Tommy Tiernan show
The JOE Movie Quiz: Week 85
PICS: The man with the biggest penis in the world has one unbelievable problem with it
Warner Bros. plan new Harry Potter movie and they want Daniel Radcliffe to star in it (Report)
You may also like
3 days ago
People think The Simpsons predicted Kamala Harris becoming VP
5 days ago
Joe Biden quotes James Joyce in farewell speech in Delaware
1 week ago
Armie Hammer drops out of Jennifer Lopez film amid social media controversy
1 week ago
Australia to kill US pigeon who survived 8,000-mile trip across Pacific
1 week ago
Cori Bush denounces Trump as "white supremacist" to chorus of boos
2 days ago
“Nothing is more serious.” HSE Chief warns of worsening Covid-19 situation in Irish hospitals
Next Page