Dr Holohan stepped away from the post in July for family reasons.

Chief Medical Officer Dr Tony Holohan who has been on leave since July is expected to return to his post in the Department of Health next week.

Reports have emerged that Dr Holohan, who stepped down from the post for family reasons, will return to the role from Monday. 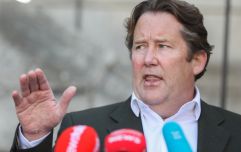 END_OF_DOCUMENT_TOKEN_TO_BE_REPLACED

Dr Holohan said he was stepping down to spend time with and care for his wife who has terminal cancer.

Dr Ronan Glynn has taken over the duties as acting Chief Medical Officer in Holohan's absence.

As the country faced the first wave of Covid-19, Dr Holohan became a significant and reassuring figure to many people during the daily briefings at the Department of Health.

Holohan's return comes as cases rise across Ireland with health officials urging the public to reduce their contacts and practice social distancing to reduce the spread of the virus.

"Dr Holohan has done an extraordinary job," he said.

Donnelly said Holohan had become a "national hero" and he also praised Dr Ronan Glynn who said has done "incredibly well" since stepping into the role.