We have dreamed of this day ever since getting thrown off the 19A for accidentally underpaying our fare in 1993.

But that's a whole 'nother story.

Dublin Bus and Bus Eireann drivers could face fines for being rude to the general public under new directives issued by the National Transport Authority. 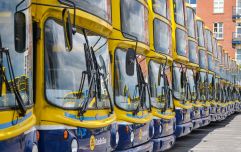 END_OF_DOCUMENT_TOKEN_TO_BE_REPLACED

Fines will be issued if buses are dirty, if the first and last buses of the day are early or late, or if the driver's having a bad day and takes it out on you.

This is all part of new contracts within the company, which also state that Twitter complaints must be responded to within an hour.

popular
Secretary-General for Department of Health receives €81,000 salary increase
Amazon Prime Video has just added 16 big movies to its library
18-year-old woman attacked with metal pole by three men in Belfast
The Tinder Swindler review: Exactly the kind of documentary Netflix should be making
Report finds "significant harm" caused to 46 children and young people at Kerry mental health service
QUIZ: Can you get 10/10 and correctly name all of these fruits?
China gives Fight Club a new ending, manages to completely change the plot of the movie
You may also like
7 months ago
New “enhanced” bus services to begin this weekend in Dublin
7 months ago
Dublin Bus has put 25 of its old double-decker vehicles up for sale
1 year ago
Eight people injured, two seriously, following collision between Dublin Bus and a car
1 year ago
Gardaí investigating after male youth stole and crashed a Dublin Bus
1 year ago
Public transport services to continue as normal following widespread closures
2 years ago
Some Irish Rail services suspended in Dublin after vehicle damages barrier
Next Page