It was a sweet sign off to a long and exhausting campaign.

After the long and exhausting campaign to repeal the Eighth Amendment, the triumphant scenes of celebration at Dublin Castle on Saturday were undoubtedly a welcome sight among 'Yes' voters.

While the seriousness of the issue was certainly not lost on any citizen who took part in the vote, the enormous relief brought out a few scenes of strange joy as the crowd was told by Taoiseach Leo Varadkar that "Ireland will still be the same country today as it was before, just a little more tolerant, open and respectful." 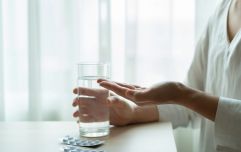 6,666 abortions were carried out in Ireland last year

END_OF_DOCUMENT_TOKEN_TO_BE_REPLACED

There was the spectacle of an excited dog owner who decided to hold their pup, Noah, up over the crowd, and then there was the peculiarly apt set of sweets one Saundra Stephen decided to share in light of the news.

To celebrate Ireland's decision to repeal the Eighth Amendment, Stephen presented members of the crowd with After Eight chocolates. 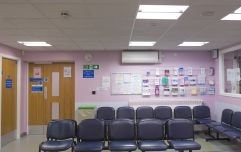 END_OF_DOCUMENT_TOKEN_TO_BE_REPLACED

Suffice to say, she captured the mood in Dublin Castle quite aptly. For the pro-Repeal voters, the victory was a little sweet.

The internet blew up with excitement, but it wasn't until RTÉ's Philip Boucher-Hayes tweeted out the unlikely gift that somebody else took notice.

In Dublin Castle a woman has just handed me an After Eight. 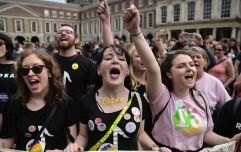 END_OF_DOCUMENT_TOKEN_TO_BE_REPLACED

The good people over at After Eight caught wind that their wafer-thin chocolates were being passed around, and they had a nice, little response to ring in the next phase in Irish history, writing on Twitter:

"We best get some more supplies to Ireland..."

We best get some more supplies to Ireland... https://t.co/FUiTDCqORA

It's the chocolate that works best after a dinner, and now, a national referendum.

popular
Netflix has just added an incredibly tense 97-minute thriller
Irish people could be treated to spectacular sights in the sky over the next few nights
Prime Video has just added 25 very big movies to its library
Eamon Ryan's mother dies in tragic accident on family holiday
Teenager airlifted to hospital after being seriously injured in Clare tractor crash
The Sweatiest Movie Quiz Of All Time
Four Irish food businesses were served with closure orders in July
You may also like
2 years ago
Green Party deny report that Save the Eighth campaigner is their prospective choice for Attorney General
3 years ago
Emma Watson pens powerful open letter to Savita Halappanavar
3 years ago
The Eighth Amendment has officially been removed from the Irish constitution
4 years ago
WATCH: Jimmy Carr, Aisling Bea and loads of other Irish comedians have a special message for you ahead of the referendum
4 years ago
Generation 8th: Pat and Mary Lyons' daughter went to Liverpool for an abortion - this is their story
4 years ago
WATCH: Chris O'Dowd has a message for the people of Roscommon ahead of the Eighth Amendment vote
Next Page