There's one mystery solved, Banksy is a sound man...

JOE seldom has any fun stories to tell when we use public transportation. To be honest, we probably could write a book about some of the more 'interesting' events that we've witnessed.

We're happy to report that 14-year old Ben Azarya had a much more memorable experience than us when he was recently travelling on a train in Oxenholme, Cumbria, after noticing a man that was sitting across from him  the journey that spent most of the time chatting on his phone.

END_OF_DOCUMENT_TOKEN_TO_BE_REPLACED

After the anonymous man's rucksack fell to the floor, some of the contents - which included a gas mask and spray paint - fell out as Ben went to help.

“He opened his rucksack and had a gas mask and spray paints inside. He got out a piece of paper and had colours marked on it of what he had been trying out and he dropped his colours.

“I picked them up for him and after that he started signing it in weird letters and numbers. He said “do you know who Robin Banks is?”

Ben admitted that he had no idea who he was, before being handed an original and autographed. 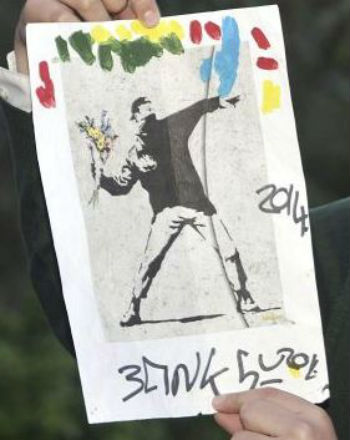 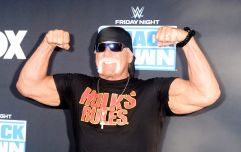 Wrestling legend Hulk Hogan 'paralysed from the waist down'

END_OF_DOCUMENT_TOKEN_TO_BE_REPLACED

The teenager added, “I said no and he said “this will be worth about £20,000 – have a good life, brother”. Ben and his mother are currently talking with Bonhams Auction House, with a view to authenticating the artwork.

So there you go folks, no kind deed goes unrewarded.

popular
Wrestling legend Hulk Hogan 'paralysed from the waist down'
Omniplex Cinemas are hiring for an awesome and very rare job
Police special operations unit seize mother's e-scooter after she took child to school on it
Prime Video has just added one of the best dramas of the last decade
Richard Madeley apologises after calling Sam Smith 'he' and bungling guest's pronouns
An extremely tense true crime drama is among the movies on TV tonight
The Last Of Us Episode Three is one of the greatest hours of TV ever made
You may also like
2 years ago
Banksy donates artwork honouring healthcare workers to hospital
4 years ago
Banksy painting sold for $1.1 million at auction, immediately self-destructs
5 years ago
UK DJ Goldie appears to have confirmed the true identity of Banksy
6 years ago
A journalist reckons he's figured out who Banksy is and he's got a strong case
6 years ago
VIDEO: Banksy paints mural on the side of a primary school and the kids love it
6 years ago
We might be about to find out what Banksy looks like
Next Page