McClean was sent death threats on social media, and regularly faces abuse for "being Irish".

The FAI and the PFA have come out in support of James McClean after the footballer opened up about the abuse he receives on social media.

McClean shared a screenshot of one particular message he received, which wished death on himself and his family. 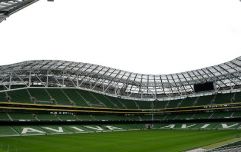 Ireland set to be part of potential 2030 World Cup bid

END_OF_DOCUMENT_TOKEN_TO_BE_REPLACED

His wife Erin also opened up on the abuse that the family receives, stating that it happens on a daily basis at this point.

She wrote: "There isn't a day that goes by that either one of us don't receive a message of some sort, whether it be a threat, or else telling us to get the f*ck out of England. And to be honest, it's gotten to the point now where it doesn't affect us one bit, and hasn't for a long time.

"However, we have three very young children who are now at an age where they know and understand these things being said.

"We can take the name-calling and the rest but what we cannot accept is threatening our family home and our children's lives.

END_OF_DOCUMENT_TOKEN_TO_BE_REPLACED

''They don't deserve this.

''Why, after nine years of constant abuse, should we be OK and have to accept receiving these threats constantly?"

Since they shared these particular messages, the FAI and the PFA have come out in support, though this is not the first time McClean has opened up about the abuse he has received.

The FAI said that it "has reached out to James in light of this most recent incident and assured him that the FAI will assist him in any way it can".

The PFA said: "No player should have to face abuse based on their race, religion or nationality. We stand with all players against discrimination."