Younger people have been warned to be particularly vigilant.

An Garda Síochána has issued a warning about the use of bank accounts by anyone apart from the named account holder following a recent incident of suspected money laundering in Cork.

Gardaí are appealing to the public, particularly younger people, not to let anyone else use their bank account, following an arrest made in Cork last week in which a man, aged in early 20s, is believed to have allowed a large quantity of cash be lodged and transferred using his account.

END_OF_DOCUMENT_TOKEN_TO_BE_REPLACED

As a result, one man was detained under Section 4 of the Criminal Justice Act and later released.

The chance to earn money quickly is a tactic used by fraudsters to recruit money mules, who are promised a share of the proceeds in exchange for their bank account details.

The money mule allows their account to be used for the transfer of dirty money, and they may not even be aware of any crime that may have been committed.

However, Gardaí have said that the money mule is still complicit if they recklessly allow their account to be used to launder the proceeds of these crimes.

Anti-money laundering legislation is designed to prevent organised crime gang members from opening up accounts so they need money mules to launder their money.

Students are often seen as an easy target, and they can be approached online, on campus, or out socialising.

END_OF_DOCUMENT_TOKEN_TO_BE_REPLACED

Gardaí said that four steps should be followed to avoid finding yourself in a situation like this:

1. Do not allow anyone to use your bank account.
2. Do not share personal bank account data.
3. Do not send or receive money.
4. Trust your instincts. If it sounds too good to be true it most likely is.

If you agree to allow your account be used in this way you are committing the offence of money laundering. Money laundering is a serious offence which, on conviction, carries a penalty of up to 14 years imprisonment.

More information is available via the infographic supplied by An Garda Síochána below. 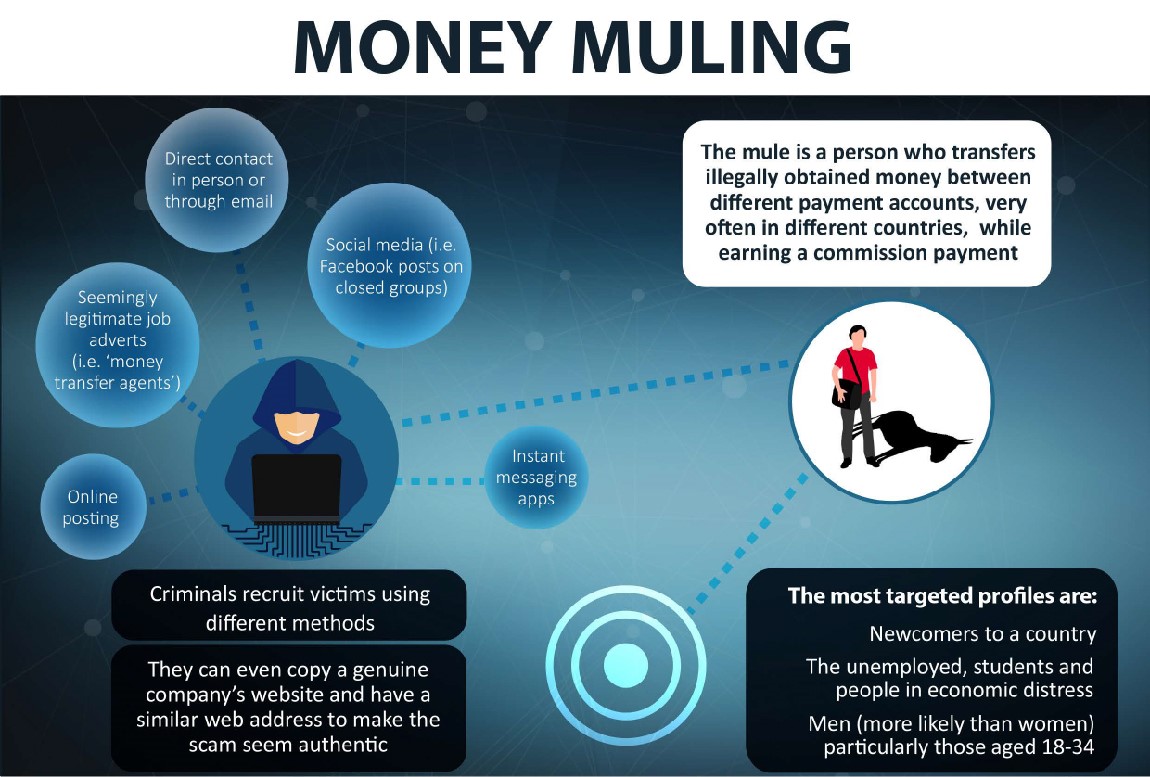 popular
QUIZ: Is your General Knowledge up to scratch?
QUIZ: Can you identify which of these countries have the colour white in their flag?
The JOE Friday Pub Quiz: Week 243
40 to 50 age group will be called to register for a Covid-19 vaccine next week
The 50 most iconic songs of all time* have been revealed
The JOE Music Quiz: Week 57
QUIZ: How many of these characters from The Simpsons can you name?
You may also like
10 hours ago
Penneys' shopping by appointment system had 275,000 bookings this week
11 hours ago
Man arrested in connection with two suspected arson incidents in Limerick
13 hours ago
Met Éireann issues Status Yellow thunderstorm warning for 23 counties
1 day ago
Taoiseach Micheál Martin says ransom will not be paid for HSE cyber attack
1 day ago
NPHET "strongly" recommends against the public buying and using antigen tests on themselves
2 days ago
Families of Ballymurphy victims receive letter of apology from Boris Johnson
Next Page