The incident occurred in November of 2018.

Gardaí are renewing their appeal to the public for information in relation to the fatal shooting of Clive Staunton, which occurred in Leixlip on 15 November 2018.

Clive Staunton's body was discovered at a house in the Glen Easton estate in Leixlip at approximately 9.15pm.

Gardaí are asking anyone who saw Clive Staunton on this date to contact them.

Gardaí are also asking anyone who saw his van, a white Mercedes-Benz Sprinter (registration 96-D-22788) with a distinctive red stripe on both sides, travelling between Bath Avenue in Dublin 4 and Leixlip between 8pm and 9.15pm on this date to make themselves known.

An Garda Síochána would also like to speak to anyone who was in the Glen Easton estate in Leixlip between 8.30pm and 9.30pm on 15 November 2018.

Gardaí are also appealing for information on the movement of a silver/grey Volvo S40 (old-style square back) between Leixlip and Manor Kilbride in Wicklow on the same date. 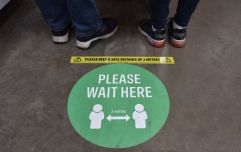 END_OF_DOCUMENT_TOKEN_TO_BE_REPLACED

Anyone with information in relation to this incident who may not have come forward previously is asked to contact Leixlip Garda Station on 01 666 7800 the Garda Confidential Line 1800 666 111 or any Garda Station.

This renewed appeal comes after a man in his 30s was arrested in relation to this shooting on 6 July 2020.

This man remains detained in Leixlip Garda Station under Section 50 of the Criminal Justice Act, 2007.


popular
68 new cases of Covid-19 confirmed
QUIZ: Name the countries in Europe which contain the letter 'S'
QUIZ: Can you identify the beer just from its can?
Stephen Donnelly announces plans for a travel 'red list'
QUIZ: Name the countries in Europe which contain the letter 'R'
The JOE Music Quiz Week 22
The JOE Movie Quiz: Week 63
You may also like
2 days ago
98 new cases of Covid-19, four new deaths
2 days ago
€240,000 worth of cannabis seized in Leitrim
2 days ago
“Nothing can be ruled out.” HSE Chief Clinical Officer on prospect of local lockdowns in Ireland
2 days ago
Driver clocked doing 203 km/h amongst multiple road offences over Bank Holiday weekend
2 days ago
Temperatures set to hit 25 degrees by Monday following welcome warm weekend
3 days ago
€3 million worth of heroin seized in Dublin
Next Page