Gardaí report an increase in number of spit and cough attacks

Gardaí were spat or coughed at during the course of their work 70 times since early April.

In a statement, An Garda Síochána reported 70 incidences of members being spat and/or coughed at, while spit hoods were used 57 times during the period from 8 April until 16 May. 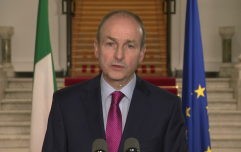 Ireland will move to Level 3 on Tuesday, here's what that means

END_OF_DOCUMENT_TOKEN_TO_BE_REPLACED

Spit hoods were introduced in Ireland as a temporary measure during the Covid-19 outbreak to protect members of An Garda Síochána from being spat or coughed at and are considered a use of force.

An Garda Síochána said that the vast majority of the public continue to abide by the restrictions to prevent the spread of Covid-19, however there were some cases of people violating the regulations.

Gardaí said they had used the new Covid-19 powers 241 times since they were brought in last month by either arresting or taking the names of the individuals breaching the restrictions.

“There has been a high level of compliance with the public health guidelines to date," Garda Commissioner Drew Harris said.

"I want to thank the public for that. But, from this week, the country is entering another critical phase.

"It is vital that we all continue to play our part in reducing the spreading of Covid-19 by adhering to the updated public health guidelines.

“Regrettably, these reprehensible spitting and coughing attacks on our personnel continue. These are a significant health and safety risk to our members in the current environment. We must protect them from such attacks.”


The Architects Of Business || JOE · "It doesn't get bigger than this for me" - Irish scientist wins EY Entrepreneur of the Year 2020
popular
The JOE Friday Pub Quiz: Week 219
Ireland will move to Level 3 on Tuesday, here's what that means
QUIZ: Can you name the Irish person from their Wikipedia page?
QUIZ: Can you answer all the £1 million questions from Who Wants to be a Millionaire?
QUIZ: How will you fare in our ‘Not as it seems’ quiz?
The JOE Movie Quiz: Week 79
5 craft beers to introduce you to the wonderful world of locally produced beer in Ireland
You may also like
13 hours ago
Reopening of restaurants and gastropubs, travel between counties set to be approved by government
1 day ago
Three more people with Covid-19 have died, 335 new cases
1 day ago
Man arrested following attempted armed robbery of post office in Donegal
1 day ago
NPHET strongly opposed to some parts of Government plans to exit lockdown next week
1 day ago
Two new metro routes and rail line to Navan proposed in new transport plan for Greater Dublin area
1 day ago
Belfast Telegraph journalist warned of threat against them from loyalist paramilitaries
Next Page