"I apologise for any offence caused."

Gerry Adams has followed up his earlier statement by formally apologising for this use of the N-word in a tweet on Sunday night.

The Sinn Féin President was referring to a tweet he'd written, and deleted, in which he referred to Jamie Foxx's central character as a 'Ballymurphy n****r." 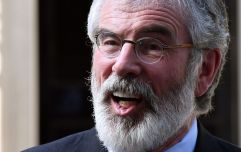 END_OF_DOCUMENT_TOKEN_TO_BE_REPLACED

"Django Unchained is a powerful film which highlights the injustices suffered by African Americans through its main character Django," he said on Monday afternoon.

"In my tweets I described him as a ‘Ballymurphy n……‘ and ‘an uppity Fenian.’

"I have acknowledged that the use of the n-word was inappropriate. That is why I deleted the tweet.

"I apologise for any offence caused.

"I stand over the context and main point of my tweet about the Django which were the parallels between people in struggle.

"The penal laws, Cromwell’s regime, and partition are evidence of that. 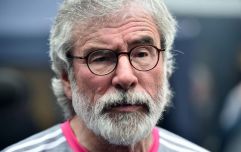 END_OF_DOCUMENT_TOKEN_TO_BE_REPLACED

"In our own time, like African Americans nationalists in the north, including those from Ballymurphy and west Belfast, were denied the right to vote; the right to work; the right to a home; and were subject to draconian laws.

"This changed because we stood up for ourselves. We need to continue to do that.

"I have long been inspired by Harriet Tubman; Frederick Douglas; Rosa Parks; Martin Luther King and Malcolm X who stood up for themselves and for justice."

The Big Reviewski || JOE · The Big Reviewski with Dune, a mini-Hangover reunion & the best of Timothée Chalamet
popular
One of the best thrillers of the decade is among the movies on TV tonight
A villainous Tom Cruise performance is among the movies on TV tonight
The JOE Movie Quiz: Week 125
"Like a whip" – director describes fatal shooting on Alec Baldwin film set
QUIZ: Get the ball rolling with this General Knowledge Quiz
The full list of all the new shows and movies coming to Netflix in November
A brilliant, under-seen Graham Taylor documentary is on TV tonight
You may also like
1 year ago
Simon Coveney once again rules out coalition government with Sinn Féin
2 years ago
WATCH: Gerry Adams talking about his new cookbook might be the funniest thing of 2018
3 years ago
WATCH: CCTV clip shows footage of explosive devices being thrown at Gerry Adams' home
3 years ago
Sinn Féin will contest the upcoming Irish Presidential election
3 years ago
Gerry Adams' house in Belfast has been attacked with an explosive device
3 years ago
Gerry Adams has called for a referendum on Irish Unity
Next Page