Forecaster predicts temperatures may get even higher next week

This weekend will be ever so slightly cooler, but the heatwave is set to return even stronger in a few days.

It is starting to happen, isn't it?

Nobody wanted to complain about the heatwave, because we spend eleven-and-a-half months of the year complaining about how bad the weather usually is in Ireland, and if we say anything bad about the high temperatures, then we might scare them away and not see their likes again for another few decades.

However, between the severe drought warning that was issued on Saturday morning, as well as the water restrictions that are being put in place around the country, and then the high UV warning and high pollen warnings, this heatwave is coming with its own set of issues.

Sure, there's no mass sellouts of bread like our last weather problem, but it is all being turned into toast if we don't get it into the shade fast enough.

So how much longer should we expect this to hang around?

A good bit yet, as it turns out.

While this weekend will see temperatures dip slightly - the giddy highs of 32 degrees won't be reached - as the highest we could probably expect is around 28 degrees, but mid-week next week, it looks like it will start to climb again.

According to Met Eireann:

"Monday will be mostly dry with some sunny spells or hazy sunshine and just the odd shower. Northerly winds will continue moderate and ease later bringing slightly cooler conditions to the northern half of the country with top temperatures around 18 to 23 degrees, but slightly warmer further south with top temperatures reaching possibly 24 to 27 degrees. 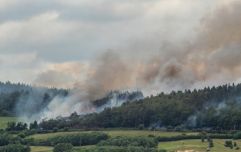 END_OF_DOCUMENT_TOKEN_TO_BE_REPLACED

"Tuesday will become sunnier again and it will be mostly dry with light northerly or variable breezes and there is just a slight risk of a few isolated showers over the south. It will become very warm with top temperatures in the mid to high twenties.

"And staying mostly dry on Wednesday with just isolated showers and some sunny spells or hazy sunshine. Winds will remain light variable or easterly with temperatures again reaching into the mid to high twenties but cooler near coasts in onshore sea breezes."

Meanwhile, the folks at Midlands Weather Channel - they who accurately predicted the severity of the snow during the winter, as well as those dizzy temperature highs in the last few days - had this to say:

"Drought conditions are likely to develop in many areas of the country over the coming week as very dry and hot conditions are expected to continue for at least another two weeks.

"Temperatures will remain well above normal with typical values reaching the high twenties, possibly over thirty in some places over the weekend and particularly during the midweek period of next week.

"Rainfall will be very small, with many areas staying completely dry. The only possibility of rainfall comes in the form of some thunderstorms which may effect parts of Munster on Sunday and more widely across the Midlands on Wednesday/Thursday. Details remain uncertain.

"A status red warning for wildfires remains in place with forested and open heath ground most susceptible to the risk.

"Soil moisture deficits are approaching critical levels, with deficits of between 80-90 mm now being recorded in some areas. This is expected to worsen over the coming weeks."

We hope you're enjoying the summer, 'cos there is no sign of it ending any time soon...

popular
QUIZ: Pat Gibson's questions on Who Wants to Be a Millionaire
QUIZ: Can you get 10/10 in this Irish sayings quiz?
The 50 most iconic songs of all time* have been revealed
QUIZ: Can you recognise the Black Mirror episode from still image?
Dr Tony Holohan: No gaff parties, we're in a pandemic
Here's Week 35 of JOE's 19 in 90 quiz
QUIZ: Can you say what all of these Harry Potter spells do?
You may also like
3 days ago
Weather to become "more changeable" after a few scorchers this week
1 week ago
Temperatures to hit 26 degrees in parts of Ireland tomorrow
1 week ago
Met Éireann issue weather warning for Donegal
1 week ago
Gale force winds, thunder showers and 20 degree temperatures in store on wild weekend
2 weeks ago
Met Éireann warns of “unseasonably windy weather” as weather advisory issued for entire country
2 weeks ago
Met Éireann issue weather warnings for three counties
Next Page