Hospitals to be inspected after schools close due to safety concerns

Leo Varadkar has confirmed that several hospitals are to be inspected after it was found that some schools built by Western Building Systems were structurally unsafe.

Western Building Systems have been involved in building units at several of Ireland's hospitals, including at Beaumont Hospital Our Lady of Lourdes Hospital, Royal Hospital Donnybrook; a laboratory and Irish, St Finbarr's Hospital in Cork; Oncology, Our Lady's Children's Hospital in Crumlin in Dublin, and a 40-bed Day Surgery Unit in Kilkenny. 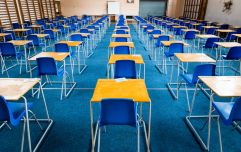 ASTI has directed its teachers to work remotely, and not enter schools three days a week

END_OF_DOCUMENT_TOKEN_TO_BE_REPLACED

The inspection follows the closure of several schools which were found to be unsafe during fire safety audits.

Ardgillan Community College, Balbriggan, Tyrellstown Educate Together National School and St Luke's National School, Mulhuddart were all forced to close either partially or fully after security concerns were identified. Over 1,000 students have been affected so far.

In addition to inspections at hospitals, there are dozens of schools, also built by Western Building Systems, that are being inspected.

The Big Reviewski || JOE · Wonder Woman 1984 star Kristen Wiig & director Patty Jenkins on comedy, Cats & handsome Irishmen
popular
The JOE Friday Pub Quiz: Week 226
50 more people with Covid-19 have died, 3,498 new cases
QUIZ: Can you pass your driving test and guess the meaning of all these road signs?
Netflix announces new true crime documentary about terrifying LA hotel
Gardaí appeal to the public to stay at home this weekend
Recall of Pedigree dog food over safety concerns
Irish punters could turn €0.98 into hundreds of millions* with a bet on the Super Jackpot
You may also like
1 week ago
Schools to remain closed, though Leaving Cert students will come in three days per week
1 week ago
Taoiseach all but confirms schools will remain closed until 31 January
1 week ago
Decision on reopening schools to be made on Wednesday, says Stephen Donnelly
1 week ago
Schools remain due to open on 11 January, despite dramatic rise in cases
1 month ago
Education Minister Norma Foley to grant students in Ireland a 'No Homework Day'
1 month ago
Teachers’ Union calls for Irish schools to close early for Christmas
Next Page