At this stage, U2 must be getting vertigo, or an immense sense of pride, whenever they see themselves at the top of the list of Ireland's richest entertainers.

Yes, you guessed it. Bono and the lads have stayed at the top of The Sunday Times' Rich List for another year after seeing their wealth increase by €15m last year.

END_OF_DOCUMENT_TOKEN_TO_BE_REPLACED

The rockers have a combined wealth of an estimated €662m and saw their coffers boosted by a recent 60-date tour of North America and Europe.

The list surveys the wealth of the 300 richest individuals and families on the island of Ireland in a variety of areas, including entertainment, sport, business, technology and construction.

As for the rest of the top three, Emmy-nominated actress Roma Downey and her husband Mark Burnett, widely considered to be one of the most influential people in American reality TV, are the second richest, while Michael Flatley is doing pretty well for himself with a 2019 wealth of €232m.

Liam Neeson, Enya and Van Morrison also feature on the list, while Boomtown Rats frontman Bob Geldof is a new entry to this year’s entertainment top 10. He's at eighth place, with an estimated value of €57m.

While Geldof isn't concentrating too much on his singing career, the humanitarian has co-founded the Planet 24 television production company and owns a third of Castaway TV, best known for the global Survivor franchise.

Its sale in 2017 fuelled a strong year for Geldof’s finances.

One Direction star Niall Horan also features on the prestigious list, as do the actors Daniel Day-Lewis and Pierce Brosnan. 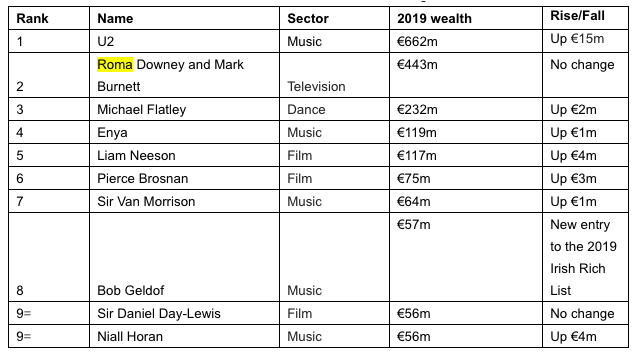 The Big Reviewski || JOE · TBR Spotlight: Loki - Episode Three - 'Lamentis'
popular
The Ultimate Robert De Niro Quiz
Ryanair calls on Eamon Ryan to explain why he is failing to reopen Ireland for air travel
Met Éireann forecasts temperatures in the mid-20s and "possibly higher" next week
A Murder in West Cork review: New doc series fixes one of Netflix's biggest problems
"Too early to say" if return of indoor pubs and restaurants will be delayed, says Stephen Donnelly
TikTok star sentenced to 10 years in prison over "human trafficking"
Irish employers urged to introduce four-day working week for employees next year
You may also like
1 day ago
The 2021 Love Island contestants have been revealed
3 days ago
QUIZ: Who's the Daddy? Name the TV show that these famous Dads appear in
1 week ago
WATCH: Jennifer Aniston and Reese Witherspoon steal the show in explosive first trailer for The Morning Show Season 2
3 weeks ago
Holby City cancelled by BBC after 23 years
3 weeks ago
Kate Winslet weighs in on the potential for Mare Of Easttown Season Two
3 weeks ago
The Matt LeBlanc as every Irish auld lad meme has gone global in a big way
Next Page