"I really resent the fact that it's all being thrown on Ireland. Brexit is a British decision"

Senator Neale Richmond was a guest on BBC Radio 4 on Monday morning and things got heated during his interview with the host of Radio 4 Today, Nick Robinson.

To begin with, Robinson introduced Senator Richmond as the man who chairs the Brexit Committee in the Dáil - he does not, he's a representative in the Seanad - and things didn't get much better after those introductory remarks.

END_OF_DOCUMENT_TOKEN_TO_BE_REPLACED

With his first question, the host asked Senator Richmond if there was a stark choice for Ireland regarding Brexit - agree to changes in the backstop, maybe no backstop in the withdrawal agreement - or face the prospect of a no deal.

Senator Richmond replied by saying: "This isn't a choice for Ireland. Ireland is negotiating as part of one of 27 European member states. We've made an agreement after nearly two years of torturous negotiations with the British government that we believe can see a way out of the Brexit scenario that allows for a managed withdrawal.

"We're well aware of the absolute consequences to a no deal scenario - we had our first Brexit preparedness meeting in December, 2014 - and the various legislative moves have been made. We will make the decisions that we have to make. However, with 60 days to go until Brexit, we absolutely feel that this can be resolved and we can come to a situation where the UK leaves the EU in an orderly, managed fashion."

Robinson then asked if the deadlock can be resolved without changing the backstop. If so, how?

The Fine Gael Senator stated his belief that if MPs aren't talking about the backstop, they're raising concerns about other elements of the withdrawal agreement and the Brexit deal.

"From our vantage, we're coming to this from a European point of view, we have taken the responsibility, we have seen the withdrawal agreement passed through the European Council and both houses of government in Ireland," said Richmond.

At this point, Robinson suggested that Ireland and the EU aren't being flexible to meet UK concerns.

END_OF_DOCUMENT_TOKEN_TO_BE_REPLACED

Richmond replied: "Nick, we've had two years of flexibility. The European and Irish side have made tons of concessions. It's not tough talk.

"The Irish government have always said, as have our European partners, that we can have the discussions on the future political framework," Richmond added.

"We never want to see the backstop come into place. It's an insurance policy but it's a vitally important insurance policy to guarantee there's no hard border on the island of Ireland and therefore preserves what is a very, very fragile peace deal. We have responsibilities to the Good Friday Agreement - as does Britain - that can't simply be walked away from."

Robinson's final question saw him asking if the Irish government are stubbornly adapting a position of 'no change, forget it' towards the UK.

"Nick, we've made countless changes at this stage," Richmond responded. 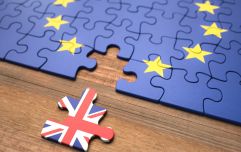 END_OF_DOCUMENT_TOKEN_TO_BE_REPLACED

"I really resent the fact that it's all being thrown on Ireland at this stage. Brexit is a British decision, the standoff is in the British parliament. We have heard what Westminster doesn't want, it's about time we hear what they do want but when they say that, they have to be cognizant of what the European side can accept. We must maintain the peace on our island. It's extremely fragile."

Andrew Adonis, former Secretary of State for Transport, was struck by the "sheer rudeness" of the interview and labeled it as "another exhibition of Brexit as hard English nationalism".

I’m struck by the sheer rudeness of @BBCr4today to interviewees from Ireland - latest one a few minutes ago. Yet another exhibition of Brexit as hard English nationalism

The Big Reviewski || JOE · Mortal Kombat director Simon McQuoid and new Sub-Zero star Joe Taslim on fatalities and fight scenes
popular
The JOE Friday Pub Quiz: Week 242
Here are the best movies on TV this evening
Kate O'Connell lays into Fine Gael in explosive Claire Byrne interview
COMPETITION: Win a star-gazing camping adventure to the stunning Aran Islands for you and your housemate
"Giant" piece of Chinese rocket set to hit Earth this weekend
The 50 most iconic songs of all time* have been revealed
Penneys shopping by appointment booking portal is now live
You may also like
4 months ago
Boris Johnson's dad has applied for French citizenship
4 months ago
UK and EU finally agree post-Brexit trade deal
4 months ago
Brexit-backing billionaire moves new vehicle production to France
4 months ago
Amazon warns Irish customers about new post-Brexit charges
5 months ago
Joe Biden says Northern Ireland border must remain open post-Brexit
5 months ago
QUIZ: Can you name all the European Union countries that use the euro?
Next Page