It's looking like the win is beyond President Trump now.

Democratic presidential candidate Joe Biden has taken the lead in voting in Pennsylvania, putting him within striking distance of the 270 electoral votes that he needs to win the presidency.

The latest numbers to come out of Pennsylvania have put Biden in a narrow lead of 5,587 votes with 95% reported. 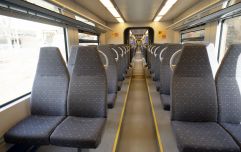 END_OF_DOCUMENT_TOKEN_TO_BE_REPLACED

Experts have said that if Biden can carry Pennsylvania, there are no pathways left for Trump to win the presidency.

Although, this is dependent on a potential Supreme Court case where Trump wants ballots which were postmarked on or before election day, but arrived in the three days after the election, to be struck out.

At the time of writing, these votes are being included in the results.

Over the past number of days, the Biden camp has said it was confident that they can hold Pennsylvania and insisted the momentum in the state has swung in their favour.

With this latest news, it's expected that some media organisations will begin to call the election in Biden's favour.

Neither AP or CNN have declared a winner at the time of writing.

House of Rugby Ireland · Ireland's feel-good win, Casey's initiation song, scrapping Sexton and Scott Williams interview
popular
Eoghan McDermott to leave RTÉ after six years (Report)
One man has been charged following Limerick street party, 50 FPNs issued
€17,500 worth of cocaine found at street party in Limerick
Sony are giving away a free game to all PS4 and PS5 owners
WATCH: Colin Farrell is in deep trouble in deep space in the first trailer for Voyagers
Turns out one of WandaVision's biggest solved mysteries hasn't actually been solved yet
Woman arrested after multiple Garda cars chase vehicle from Ballymun to Wicklow and back
You may also like
2 days ago
Former French President Nicolas Sarkozy sentenced to jail for corruption
5 days ago
US Customs intercept 20kg of cocaine hidden on corn flakes
1 week ago
Tiger Woods “awake and responsive” following surgery after car crash
1 week ago
Boeing advises airlines to suspend use of 777s after mid-flight engine failure
1 week ago
Seth Rogen calls Ted Cruz a "motherf*****" for fleeing Texas during crisis
1 week ago
BAI rejects viewer complaints of RTÉ's coverage of Donald Trump and the US election
Next Page