For the first time ever, safety guidelines have been released in relation to phone usage, with the California Department Of Public Health stating that various studies showing that specific signals from mobile phones can cause sleeplessness, headaches, and in some cases even cancer. 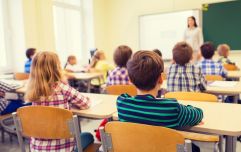 END_OF_DOCUMENT_TOKEN_TO_BE_REPLACED

"Although the science is still evolving, there are concerns among some public health professionals and members of the public regarding long-term, high use exposure to the energy emitted by cell phones. We know that simple steps, such as not keeping your phone in your pocket and moving it away from your bed at night, can help reduce exposure for both children and adults."

While the warning was put out in California to warn Americans of the health issues with overuse of mobile phones, considering that Irish people have been called the highest mobile phone users in the Western World (via The Independent), it is probably very good advice for us to heed, too.

popular
One of the best movies of the decade has just been added to Netflix
20 years ago, one of the best sci-fi movies of the 21st century was a box-office bomb
Surprise frontrunner emerges as potential next James Bond as producers 'love him'
Katherine Ryan says famous TV star is a ‘predator’ and everyone in industry knows
One of the scariest films of all time is among the movies on TV tonight
QUIZ: JOE's Big News Of The Day Quiz #21
Die Hard and Top Gun actor Clarence Gilyard has died, aged 66
You may also like
2 years ago
Irish mobile network 48 launches offer with all calls, all texts and 100GB of data for €7.99 per month
2 years ago
Irish mobile network GoMo extends €9.99 per month for life offer for one more week
3 years ago
New Irish mobile network launches with offer of €9.99 per month for life for first 100,000 customers
3 years ago
Over one third of Irish people would cancel their holiday if they forgot their mobile phone
4 years ago
Phone users reporting new bug that is sending private photos to contacts without warning
4 years ago
Apple CEO says next iOS update will allow users to disable battery slowdown
Next Page