Fair play to them, but they're a day early...

Varadkar walked in the New York parade last year, and has continued his tradition in Chicago, while this is McGregor's first involvement in the occasion. 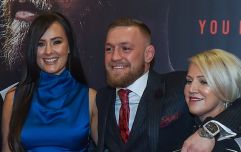 END_OF_DOCUMENT_TOKEN_TO_BE_REPLACED

Just a week after being arrested in Miami, McGregor arrived to march in the parade, which he led alongside the city’s mayor, Rahm Emanuel.

Nader Issa, a journalist working in Chicago snapped some pictures of the parade, including one of both Varadkar and McGregor side by side.

END_OF_DOCUMENT_TOKEN_TO_BE_REPLACED

An interesting duo, to say the least.

This follows Varadkar's meeting with President Donald Trump and Mike Pence, where he discussed Brexit negotiations, and the possibility of Trump coming to Ireland soon.

It's been a busy couple of hours for The Notorious, as he appeared to agree to a fight with Nate Diaz on Twitter in the early hours of Saturday morning.

All in a day's work.

popular
Here is a list of every Bank Holiday in Ireland in 2023
Amazon Prime Video has just added 21 big movies to its library
Bereaved mother shocked after sister uses her late baby's name for her own child
One of the best crime thrillers ever is among the movies on TV tonight
Katherine Ryan had plenty to say about Leonardo DiCaprio's dating life
Nicola Bulley's phone found by the river 'could be a decoy', diving expert suggests
The 50 most iconic songs of all time* have been revealed
You may also like
3 days ago
Conor McGregor offers solution to Croke Park fiasco that should suit all parties
1 week ago
Conor Mcgregor hit by car ‘at full speed’ while cycling
6 months ago
Conor McGregor to make film acting debut in Road House remake
1 year ago
WATCH: Conor McGregor and Machine Gun Kelly face off at MTV VMAs
2 years ago
Jake Paul calls out Conor McGregor in nasty video
2 years ago
Conor McGregor responds to Paschal Donohoe’s calls to encourage social distancing amongst Irish public
Next Page