This is the reaction of everyone in the country right now...

It happened a number of times, according to Varadkar himself. 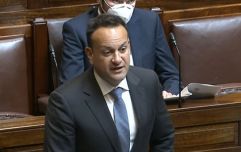 END_OF_DOCUMENT_TOKEN_TO_BE_REPLACED

Yes, that image of the pair, engaging in a series of convoluted stretches, will be burned into our minds forever.

Commenting on the announcement of Varadkar as the new Taoiseach, Adams made the big reveal.

"I think [Leo Varadkar] is a decent man, and I wish him well," Adams said. "I do not know him well, though he and I both attended the same pilates class. We couldn't get the former Taoiseach to stretch as far as that."

Of course, it brought much laughter from the crowd.

But our favourite part, as well as many others, was the reaction of former Taoiseach Enda Kenny, who was sitting beside Varadkar.

Speaking in the Dáil later in the session, Varadkar had quite the response to Adams' remark.

"I do think he was better at it than I was," Varadkar admitted. "Perhaps he has experience of being in a tight squeeze".

The Big Reviewski || JOE · The Big Reviewski with Ray Liotta, Goodfellas facts & Tom Hanks making us cry
popular
Revolut finally rolls out feature which allows users access wages before payday in Ireland
Kings of Leon announce first Irish shows in five years
One of the most-anticipated movies of the last few years is finally available to watch at home this week
Seven people hospitalised after huge fight at Tuam cemetery
10 years ago this week, the best sports movie ever made was released in cinemas
Daniel Craig leads the charge on this week's line-up for The Late Late Show
Retail billionaire calls on unvaccinated people to be banned from shopping centres
You may also like
3 days ago
"Vile" and "homophobic" protest outside Leo Varadkar's home condemned by TDs
5 days ago
Employers cannot ask staff to reveal their vaccination status, confirms Government
6 days ago
Simon Harris is absolutely not having any of these leak accusations
1 week ago
Marc MacSharry sticks the boot into Micheál Martin on his way out the door
1 week ago
Simon Coveney survives no-confidence vote as Sinn Féin blasts “culture of cronyism”
1 day ago
Gardaí renew information appeal for 25-year-old hit-and-run case
Next Page