Leo Varadkar's party is down by five points.

Fine Gael has seen a major downturn in support from the public according to figures released via two new opinion polls.

A Sunday Business Post/Red C poll has Fine Gael on 28%, down five points from the last poll, marking the party's lowest Red C rating since November of 2017. 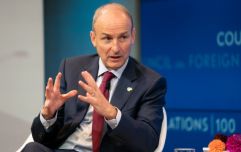 END_OF_DOCUMENT_TOKEN_TO_BE_REPLACED

Reaction to the National Broadband plan is cited as a key reason for the plummet, as Taoiseach Leo Varadkar continues to field questions over the €3 million project.

Speaking to the Sunday Business Post, Red C Research chief executive Richard Colwell said that the figures “may not be so positive for the party” in line with upcoming local council elections.

That poll puts Fianna Fáil up by one point to 24%, while highlighting a "very strong showing" for the Green Party, who rise by four points to 7%.

Elsewhere, Sinn Féin's support drops down by one point to 13%, Independent candidates are down by two points to 14% overall, while Labour and Social Democrats are unchanged on 5% and 2%, respectively.

The survey was conducted using a random sample of 2,000 adults aged over 18 via telephone and online between 6 and 16 May. 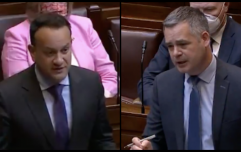 END_OF_DOCUMENT_TOKEN_TO_BE_REPLACED

An hour after the above poll arrived on Saturday evening (18 May), a second poll confirmed the dramatic drop for Fine Gael.

Conducted between 2 and 14 May, the Sunday Times/Behaviour & Attitudes poll also places Fine Gael on 28%, neck and neck with Fianna Fáil on the same number.

Once again, the Green Party has enjoyed a surge in support, and it's better reading for Sinn Féin, who register at 19% by contrast.

The Big Reviewski || JOE · The Big Reviewski with Ray Liotta, Goodfellas facts & Tom Hanks making us cry
popular
The JOE Friday Pub Quiz: Week 262
The 50 most iconic songs of all time* have been revealed
Jason Byrne forced to cancel tour dates due to a heart condition
The five best true crime documentaries to watch on Netflix this weekend
QUIZ: How well do you know the life and work of Denzel Washington?
PICS: The man with the biggest penis in the world has one unbelievable problem with it
BBC reporter covering petrol shortage called Phil McCann
You may also like
1 day ago
Five of the best dates for a new bank holiday in Ireland, as decided by us
2 days ago
Coveney hits out at Varadkar protestors but outlines difficulties of stopping them
4 days ago
"One person's rent is another person's income" – Varadkar rejects calls for three-year rent freeze
4 days ago
Government announces special €1,860 payment for laid-off workers during pandemic
5 days ago
Katherine Zappone "respectfully declines" invitation to appear before Oireachtas Committee
5 days ago
"Vile" and "homophobic" protest outside Leo Varadkar's home condemned by TDs
Next Page