The incident occurred on Monday morning.

A Red Line Luas collided with a truck in the Smithfield area of Dublin on Monday morning  (30 March).

The driver of the tram, a male whose age is currently unknown, was taken to the Mater Misericordiae University Hospital with what is believed to be non-serious injuries. No other injuries were reported.

Traffic diversions are in place for the next number of hours as the Luas has been pushed off track and will take some time to repair.

A number of images from the scene can be seen here:

Firefighter/Paramedics from Phibsborough and HQ have attended the scene of an RTC involving a truck and @Luas at the Benburb/Queen Street junction. 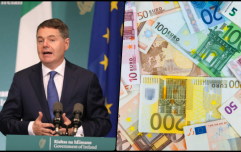 END_OF_DOCUMENT_TOKEN_TO_BE_REPLACED

Luas operators Transdev have since offered an update about the situation, saying: "Due to a road traffic accident at Smithfield there is currently no service from Blackhorse to The Point. Services will operate from Tallaght / Saggart to Blackhorse.

"We apologise for any and all inconvenience caused."

Any Luas tickets will be valid on Dublin Bus services as a result.

popular
€600 energy credits and free schoolbooks for children set to be announced in Budget 2023
Man hasn't put arm down for 10 years - and this isn't even a world record
Jeffrey Dahmer’s dad thinks he knows what’s to blame for son becoming a serial killer
QUIZ: Test your knowledge with this Ultimate Friends Character Quiz
2022's sexiest show is finally available to watch in Ireland
The JOE Friday Pub Quiz: Week 313
QUIZ: Name the country for each of these non-capital cities
You may also like
1 day ago
Gardaí appealing for witnesses following car striking pedestrian in Cork
3 days ago
Details of cash payments and Christmas bonus outlined in Sinn Féin’s alternative budget
3 days ago
“It’s like insects are crawling all over your body.” Irish people reveal impact of Long Covid
3 days ago
Female cyclist seriously injured after collision with truck in Kildare
4 days ago
Gardaí involved in dangerous driving incident have since reported unfit for duty
4 days ago
Aldi signs €8.5 million deal to sell Irish treats around the world
Next Page