A syndicate made up of a Mayo retirement group arrived at the National Lottery headquarters this week to claim its Daily Million prize worth €1,000,000.

Based in Parke, located near Turlough and just outside Castlebar, the retirement group is called Young at Heart and its 47-strong syndicate was formed over seven years ago in January 2015.

END_OF_DOCUMENT_TOKEN_TO_BE_REPLACED

Its winning Daily Million ticket was sold in Turlough Stores on 3 October, with the syndicate belting out 'The Green and Red of Mayo' when it went to collect the prize on Monday (21 November).

In a statement, Michael Cosgrove - spokesperson for the syndicate - described the utter shock he felt after finding out the group had won. 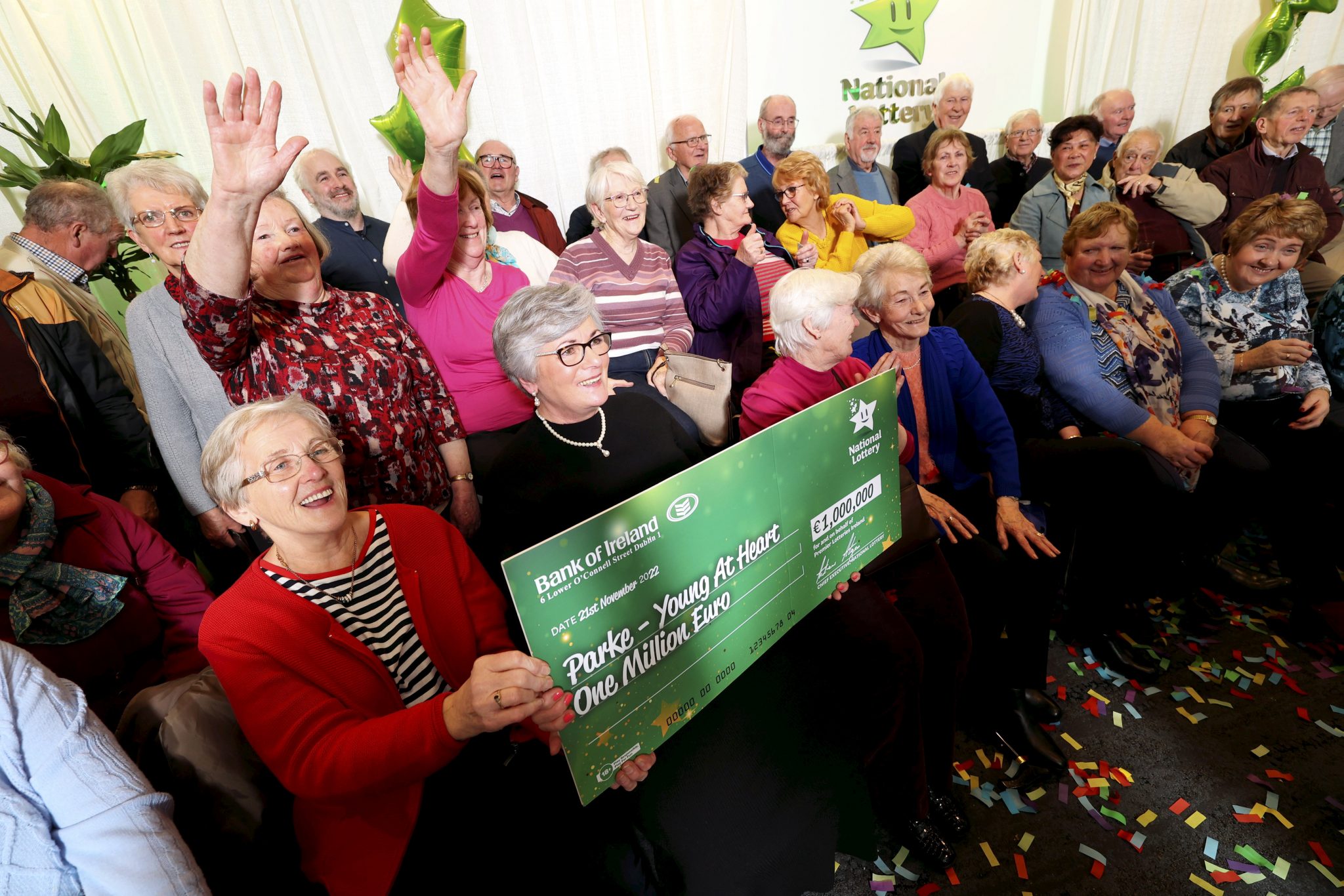 A syndicate of 47 claimed their Daily Million prize worth €1,000,000 at National Lottery HQ on Monday

END_OF_DOCUMENT_TOKEN_TO_BE_REPLACED

“We were all so excited when we found out. Anne Kelly rang me and said, Woah we’ve won a big one," he recalled.

"We’re so happy to be sharing this prize with each other rather than one individual winning it on their own.

"It means so much more to us as a group to experience this joy together."

Meanwhile, syndicate member Anne Kelly revealed how the group has already had a National Lottery style celebration at one of their group meetings in Parke.

END_OF_DOCUMENT_TOKEN_TO_BE_REPLACED

“We had a meeting the Thursday after we’d won and we had our own celebrations with bubbly, food and music," she said.

"It was a real party, and the atmosphere was just electric! The whole community is really delighted for us."

A cruise, a trip to Greenland and a holiday of a lifetime are just some of the things members of the syndicate hope to do with their winnings.

popular
Amazon Prime Video has just added 38 very big movies to its library
Ashton Kutcher opens up about rare disease that left him unable to see or walk
The start of the superhero takeover of Hollywood is among the movies on TV tonight
The JOE Movie Quiz: Week 182
The Pogues’ Shane MacGowan rushed to hospital
Matthew Perry can't rewatch any of Friends for heartbreaking reason
Matt Lucas quits Great British Bake Off role
You may also like
1 day ago
We could be getting snow this Thursday, according to Met Éireann
2 days ago
Ireland sees '100% success rating' with four-day work week trial
2 days ago
Winter warning issued as "severe" week of cold weather in store for Ireland
4 days ago
Temperatures set to drop to freezing this weekend as Christmas predictions emerge
6 days ago
11 Irish counties in the spotlight as Gardaí crack down on sex trade
1 week ago
Face of boy attacked by dog in Wexford is "completely destroyed", says his family
Next Page