If you plan on lounging outdoors today then make sure you keep a bottle of sunscreen handy and remember to drink plenty of water too, because it’s set to be an absolute scorcher…

This week has given us some of the best weather we’ve had here in Ireland so far this year and judging by the reports from Met Éireann this morning, the good weather is going to continue.

According to Met Éireann: “Unbroken sunshine is likely in many places but some mist and low cloud may still affect some coastal parts of the North and Northwest at times through the day. 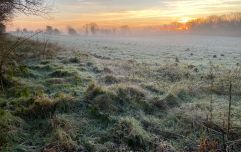 END_OF_DOCUMENT_TOKEN_TO_BE_REPLACED

“Highest temperatures will range from 22 to 27, or 28 degrees, the highest values likely to be in Midland areas in very light Northerly or variable breezes, with sea breezes developing along some coasts in the afternoon.

However, while the good weather will bring it’s fair share of warm temperatures and sunshine, it will also increase your chances of getting sunburnt, as we found out yesterday thanks to one lad from Donegal and another who is in Chicago on his J1.

Severe sunburn can lead to various forms of skin cancer, not to mention an agonising couple of days while you get acquainted to the acquired smell of Aloe vera. So avoid looking like a lobster by slapping on a bit of sunscreen before it's too late. You’ll be glad you did…

popular
The Last Of Us Episode Five will premiere days earlier in Ireland and UK
Amazon Prime Video has just added 21 big movies to its library
Shock as blues singer beats Adele, Beyonce and Taylor Swift to win Song of the Year Grammy
5 years ago, Hollywood took a massive gamble on a huge sequel... and lost big time
One of the best crime thrillers ever is among the movies on TV tonight
Ben Affleck's bored expression at the Grammys becomes a meme
Netflix has just added 12 very big movies to their library
You may also like
3 weeks ago
New weather warning issued for entire country as temperatures set to fall to -5 this week
3 weeks ago
Snow expected over coming days as winter weather advisory issued for entire country
3 weeks ago
Weather warning issued for entire country as power outages possible
4 weeks ago
Seven counties hit with weather warning over 'heavy' rain
1 month ago
It looks like we'll be reeling in the New Year with a LOT of rain
1 month ago
Two Status Yellow warnings issued with wind and rain in the mix
Next Page