New study suggests penis size does matter, we repeat, DOES matter to women

A study conducted by researchers at the Australian National University has found that penis size does have an impact on how attractive women find men, but maybe not in the way that you'd think.

The study found a strong, positive relationship between flaccid penis size and attractiveness, but only up to a certain point.

The relative increase in attractiveness starts to diminish after the size of the flaccid penis reaches 2.9 inches, meaning that once your penis is bigger than this under-average size, perceptions of attractiveness begin to level out (other studies suggest that an average penis is roughly 3.5 to 3.9 inches in length), and size matters less. 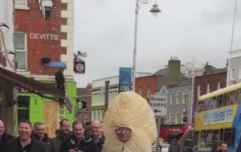 END_OF_DOCUMENT_TOKEN_TO_BE_REPLACED

The study, however, still contradicts assertions that 'size doesn't matter' to most women - instead suggesting that bigger is better up until just under three inches while flaccid, after which it becomes less important.

We are sorry you had to find out this way.

popular
A terrific crime thriller is among the movies on TV tonight
One of Keanu Reeves' best movies has just been added to Netflix
Daniel Craig's best pre-James Bond film is among the movies on TV tonight
The JOE Movie Quiz: Week 131
QUIZ: Can you get full marks in this General Knowledge Quiz?
QUIZ: Do you reckon you can get 15/15 in this General Knowledge Quiz
The 50 most iconic songs of all time* have been revealed
You may also like
4 years ago
Study claims that Northern Irish men have bigger 'manhoods' than men from the Republic
4 years ago
Man gets penis stuck in free weight in the gym, firefighters break out the hydraulic saw
4 years ago
80% of men have admitted to taking part in this new grooming craze for their manhood
4 years ago
New man sex craze involves rubbing this on your manhood before doing the deed
4 years ago
Fire Brigade plead with men to stop doing this painful thing to their manhood
5 years ago
PIC: Swedish people are being trolled by a gigantic snow penis
Next Page