Health Minister Simon Harris has said that the numbers of guests that will be allowed at weddings later this summer is "highly unlikely to be anything like 100".

The Minister was speaking on RTÉ Radio One's Morning Ireland, where he answered a range of questions from the general public in relation to the changes to current Covid-19 restrictions that came into force today, as well as the changes that are anticipated to be made over the coming weeks.

The government has already indicated that under Phase 4 of its recovery roadmap, which is hoped to be introduced on 20 July, small weddings will be allowed. The official wording reads:

"Small social gatherings by family and close friends will be allowed but are to be limited to a maximum number of attendees for a period of time where social distancing can be maintained (for example: small weddings, baptisms)." 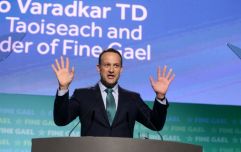 END_OF_DOCUMENT_TOKEN_TO_BE_REPLACED

That weddings with guests present will be allowed to resume is, of course, being welcomed. However, the question of exactly how many guests will be permitted at such "small weddings" is a crucial one for many couples across the country who have weddings booked in the coming months, or have postponed their weddings and are hoping to reschedule for later this year.

Speaking on Monday morning, Simon Harris acknowledged that the situation is causing a lot of angst for people who are planning their big day. He said that the Government is working on guidance for weddings "that will put a number on it, or a range".

However, he cautioned that the number is "likely to be very small" adding that it's "highly unlikely to be anything like 100".

The Minister for Health added that he himself was due to be a groomsman at a wedding taking place this summer, but it had now been pushed out to next year.

popular
Beware of the very clever WhatsApp hack that is locking Irish users out of their accounts
Marvel's shows on Disney Plus are giving great actors the chance to give great performances
JD Sports to open warehouse in Ireland this year after Brexit-related disruptions
Motor insurance costs set to fall from June after changes to payout guidelines
QUIZ: Can you name all these European countries from a list of cities?
The 50 most iconic songs of all time* have been revealed
QUIZ: Can you score top marks in this short general knowledge quiz?
You may also like
15 hours ago
NIAC recommends AstraZeneca vaccine should only be given to people 60 and over in Ireland
17 hours ago
No new deaths related to Covid-19 reported in Ireland, 394 new cases
19 hours ago
Despite massive impact on sector in 2020, beer remains Ireland's favourite alcoholic drink
21 hours ago
Carlow, Mayo and Roscommon have the lowest percentage of people staying within 10km of home
23 hours ago
New Zealand border staff informed they must get Covid-19 vaccine or they will be redeployed
3 days ago
EMA reviewing possible link between blood clots and Johnson & Johnson Covid-19 vaccine
Next Page