One of Ireland's busiest train stations is set to close for 13 weekends spread out over the next two years to facilitate a roof replacement project.

The new roof, which is has been identified as a ''crucial safety project'' according to the site's operator, is set to be completed in June 2020. At present, the roof of Ireland's busiest commuter station, is being protected by mesh netting, which has been in place for years as a safety measure. 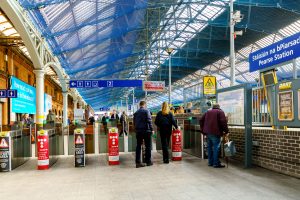 Iarnród Éireann commented on the severity of project, mentioning that due to safety issues - the roof replacement project was ''urgently required'', as parts of the steel roof structure of the 130-year-old building were corroding.

This is Pearse Street Station's second huge renovation in as much as ten years. Back in 2008, automatic ticket validation machines were installed on platforms 1 and 2, the front entrance of the station was changed, Spar was completely taken out of the station and the old ticket barriers, as well as Platforms 3, 4 and 5 were removed.

It's believed that between eight and nine million trips are made through Pearse Street Station each year.

popular
Amazon Prime Video has quietly added 18 big releases to its library
David Jason says he wants to play Del Boy in Only Fools And Horses again
Confirmation on lifting of restrictions for pubs and events expected this week
Here's where all the 149 tickets that won €36,687 in Saturday's Lotto were sold
That Nic Cage film everyone is talking about is finally available to watch at home
Put the pedal to the metal with this General Knowledge Quiz
Funeral of Ashling Murphy to take place today
You may also like
2 days ago
Chapters Bookstore announces closing date after 40 years in business
5 days ago
213-bed four-star hotel and rooftop restaurant at the centre of new Clerys Quarter
5 days ago
Six teenagers arrested following car chase in Dublin
1 week ago
A man has died after a shooting in Dublin
1 week ago
Dublin bar ranks as 3rd "most mysterious" in all of UK and Ireland
1 week ago
Two teenagers arrested in connection with Ballyfermot assault
Next Page