Jeremy Clarkson's new Amazon Prime show The Grand Tour has been downloaded illegally more than any other programme, reports suggest.

Figures from piracy data analysts MUSO, published by the Mail on Sunday, indicate that the first three episodes of the motoring show have been the subject of a combined 18.9m illegal downloads, with 13.7% of the total originating in the UK.

The Grand Tour reportedly costs several millions per episode to make, and encouraged a number of Top Gear fans to fork out for Amazon subscriptions to get their fill of Clarkson, Richard Hammond and James May.

And, while the illegal download figures have reportedly been high, the number of legal downloads has also been through the roof according to the streaming service, who claim it has broken records 'around the world'.

A 5 tonne mud car. It's sure to be a success James. Stream episode 4 of #TheGrandTour on Amazon Prime Video now. pic.twitter.com/WM1umB1zRy

Amazon Prime video costs subscribers €94 per year, and also includes shows such as Westworld, The Walking Dead and The Missing. 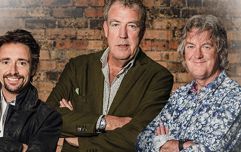 END_OF_DOCUMENT_TOKEN_TO_BE_REPLACED

'The Grand Tour' has a rating of 9.4/10 at the time of writing, suggesting diehard fans of Clarkson et al's previous work have already warmed to the new project.

Filming has finished on the first series, with the final episode due to come to the streaming service early next year.

popular
The JOE Friday Pub Quiz: Week 308
Netflix has just added 23 very big movies to its library
Controversial influencer Andrew Tate banned from Instagram and Facebook
One of 2022’s best hidden-gem comedy series is available to stream
Pilots fly over destination airport at 37,000 feet because they were both sleeping
Two Irish people arrested in "smuggling event" near Miami
Multiple fatalities after planes collide mid-air over California airport
You may also like
6 days ago
James May reportedly hospitalised after crashing into wall at 75mph filming new show
3 months ago
Jeremy Clarkson "infuriated" as he fails to receive planning permission for farm
1 year ago
Clarkson's Farm returning for season 2 after fan complaints
3 years ago
Jeremy Clarkson responds to homophobic claims by saying he likes lesbian porn
4 years ago
Jeremy Clarkson makes dream-shattering mistake on Who Wants To Be A Millionaire
4 years ago
Viewers all had the same response to Jeremy Clarkson hosting Who Wants To Be A Millionaire
Next Page