Pic: David Beckham defends himself on Instagram after Daily Mail questions his parenting

Manchester United legend David Beckham has used Instagram to make clear his fury at the Daily Mail after the newspaper printed a picture of his daughter sucking on a soother, alongside the headline 'Why does Harper, four, still use a dummy?'

The Independent Press Standards Organisation's code of practice specifically states that 'editors must not use the fame, notoriety or position of a parent or guardian as sole justification for publishing details of a child's private life.' 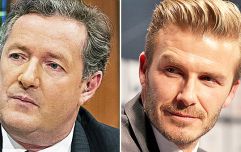 END_OF_DOCUMENT_TOKEN_TO_BE_REPLACED

We don't know whether or not Beckham has read this code of practice, but he eloquently put the Mail to rights on Instagram earlier on today.

"Why do people feel they have the right to criticise a parent about their own children without having any facts?", asked the former England captain. "Everybody who has children knows that when they aren't feeling well or have a fever you do what comforts them best."

popular
Amazon Prime Video has quietly added 18 big releases to its library
Here's where all the 149 tickets that won €36,687 in Saturday's Lotto were sold
Man arrested on suspicion of the murder of Ashling Murphy
Moon Knight could be leading directly into Marvel's scary version of the Avengers
New HBO comedy series looks like a must watch for Flight of the Conchords fans
Confirmation on lifting of restrictions for pubs and events expected this week
Euphoria fans delighted after learning Fezco's Irish connection
You may also like
2 months ago
Ed Sheeran says Game of Thrones cameo backlash ruined the experience for him
9 months ago
David Beckham to front new Disney+ football documentary series
10 months ago
David Beckham to be a football mentor in Disney+ show
3 years ago
David Beckham gets paid a stupid amount of money for his sponsored Instagram posts
3 years ago
David Beckham features in hilarious new promotional video for Deadpool 2
4 years ago
David Beckham speaks about his special connection with Ireland
Next Page