This is the President of the US...

While the solar eclipse is now a mere memory on Monday, it seems it's living on in Donald Trump's mind over the last couple of days.

Not surprising given that he may still be seeing stars after looking directly at the Sun on Monday evening not once, not twice, but three times.

END_OF_DOCUMENT_TOKEN_TO_BE_REPLACED

But thankfully, there hasn't been reports of any lasting injuries from the incident on Monday but it's still clearly a moment Trump won't forget, judging by his choice of retweets.

On Thursday, Trump retweeted a meme of "the best eclipse ever," featuring a montage of four photos that show Trump blocking out former US President Barack Obama. 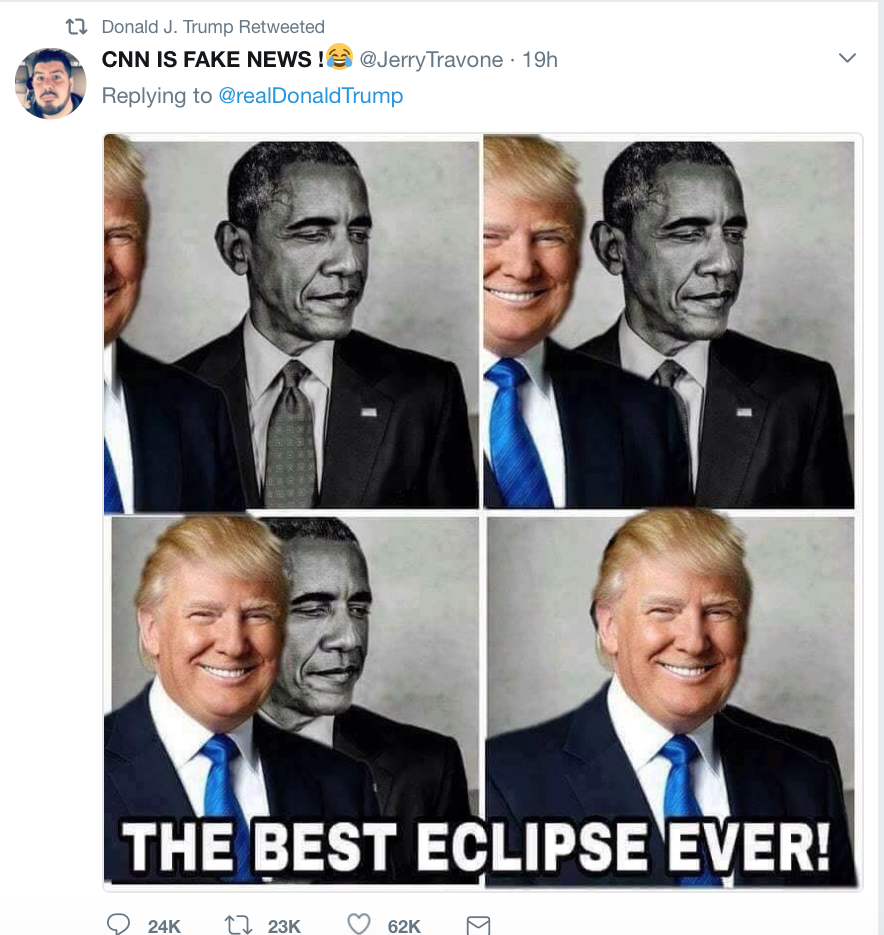 END_OF_DOCUMENT_TOKEN_TO_BE_REPLACED

Trump retweeted the above meme after he tweeted to say a legislative "mess" could have been avoided if Republican leaders had listened to him and tied debt ceiling legislation to a veterans affairs bill.

Meme's such as these have been doing the rounds over the past number of days with many of them being shared widely on social channels.

popular
Netflix has just added an incredibly tense 97-minute thriller
QUIZ: Name all the counties of Ireland that contain 3 vowels or more
Prime Video has just added 25 very big movies to its library
Irish people could be treated to spectacular sights in the sky over the next few nights
Eamon Ryan's mother dies in tragic accident on family holiday
A great underseen action thriller is among the movies on TV tonight
The Sweatiest Movie Quiz Of All Time
You may also like
1 week ago
Too little too late for sorry Alex Jones as he's hit with $4 million bill over Sandy Hook conspiracy claims
1 week ago
Oil and gas companies making record profits during energy crisis is "immoral", says UN Chief
1 week ago
Irish CNN journalist Donie O'Sullivan has car stolen as part of weirdly specific online challenge
1 week ago
Unsealed court documents allege Johnny Depp suffered from erectile dysfunction
1 week ago
Osama Bin Laden's successor killed in US drone strike
1 week ago
Pope Francis says he may need to cut back his amount of travelling or retire
Next Page