Pope Francis is due to arrive in Dublin Airport in a number of hours.

A number of people in Ireland feel that the head of Catholic Church is not welcome in the country following the scandals that are now synonymous with the organisation.

Tonight saw the GPO illuminated with the words "love", "truth", "justice" and "Stand4Truth". 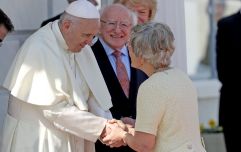 END_OF_DOCUMENT_TOKEN_TO_BE_REPLACED

People have been openly voicing their displeasure at the Papal visit, with a protest event being organised for Sunday. The hashtag #Stand4Truth is the title of the event at the weekend, as well as being one of the things illuminated on the GPO on Friday night.

Sunday's event kicks off at 2.30pm on Sunday 26 August at the Garden of Remembrance.

It is set to take place on the same day that the Pope will say mass in Phoenix Park – and aims to stand with survivors of clerical abuse and institutionalisation as well as boycott the Papal mass itself.

Hozier, one of Ireland's leading musicians, will be performing at the event.

popular
Very popular US fast food chain planning to open in Ireland
20 years ago, one of the best sci-fi movies of the 21st century was a box-office bomb
Katherine Ryan says famous TV star is a ‘predator’ and everyone in industry knows
Boy seriously injured after alleged dog attack in Wexford
QUIZ: JOE's Big News Of The Day Quiz #19
The JOE Friday Pub Quiz: Week 322
QUIZ: Only the sharpest will get 100% in this General Knowledge test
You may also like
3 years ago
More people watched Daniel and Majella on Room to Improve than both All-Ireland Finals last year
4 years ago
Papal visit shows that 'Catholic Ireland' is a thing of the past
4 years ago
Figures reveal how many people watched Pope Francis in Ireland on RTÉ
4 years ago
The Pope's Skoda that he used in Dublin will be donated to help the homeless
4 years ago
Here's the full transcript of what the Pope said about the Tuam memo he received
4 years ago
The Pope's reaction to Daniel O'Donnell's performance was absolutely brutal
Next Page