Pic: One of the most stunning photos of the Aviva Stadium we've ever seen

There were some beautiful scenes at the Aviva Stadium on Saturday evening after Ireland's brilliant win over Australia.

The scenes in the Aussie dressing room after were less pretty... allegedly.

The stadium on Lansdowne Road is one we're all very proud of and we've seen some amazing views of it thanks to TV and photographers.

However, this photo that georgeinwonderland posted this on her Instagram earlier is one of the most unique shots we've seen.

The mix of fog and sunshine around the stadium is eerily stunning. 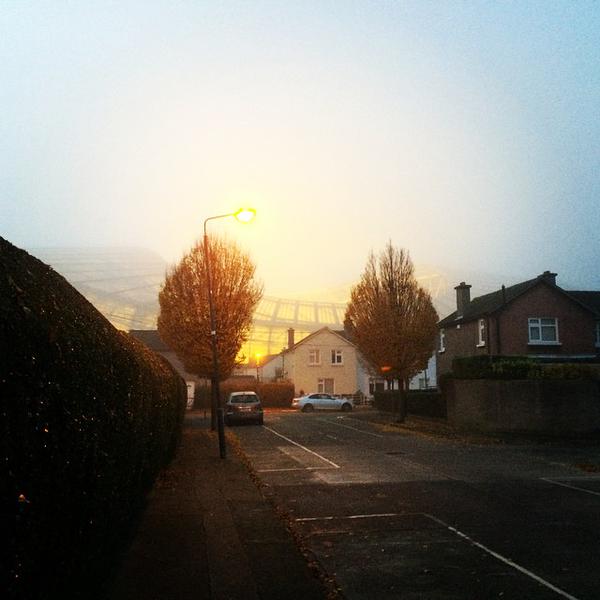 Thanks to @HansVanBurger who sent this into us on Twitter.


popular
WATCH: For the first time since 2011, someone has won the Winning Streak jackpot of €500,000
15 new documentaries you should be watching on TV in 2020
QUIZ: How well do you know Will Smith's movie career?
The JOE Friday Pub Quiz: Week 174
15 films from the last 15 years that legitimately deserve to be on the Leaving Cert
Kevin Costner wants to make an epic film about the life of Michael Collins
You may also like
3 days ago
Road closures to remain in place on Thursday morning due to farmer protest
3 days ago
Eoghan Murphy "saddened" by serious injuries to homeless man, removes campaign posters from scene
4 days ago
Man left in serious condition after his tent was removed as he slept in it
4 days ago
"Partial body remains" found in burnt out vehicle in Dublin
4 days ago
Gardaí issue advisory ahead of large scale protest in Dublin on Wednesday morning
5 days ago
Over €750,000 worth of cocaine, heroin, MDMA and cannabis found following search of houses in Dublin
Next Page